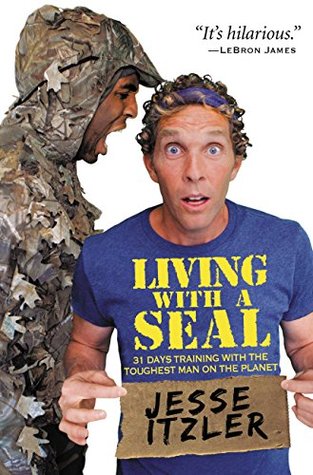 Living with a SEAL: 31 Days Training with the Toughest Man on the Planet by Jesse Itzler

Living with a SEAL is like a buddy movie if it starred the Fresh Prince of Bel-Air… and Rambo. Jesse is about as easy-going as you can get. SEAL is…not. He even shows up at Jesse’s apartment with an inflatable raft just in case the Itzler family ever has to escape Manhattan by crossing the Hudson River. Jesse and SEAL’s escapades soon produce a great friendship, and by the time SEAL leaves, Jesse is in the best shape of his life, but he gains much more than muscle. At turns hilarious and inspiring, Living with a SEAL ultimately shows you the benefits of stepping out of your comfort zone.

I decided to step out of my comfort zone and read this book because, after all, that is exactly what Jesse Itzler does by inviting a Navy SEAL into his house to train him and push his limits.

This is more like the type of book my brother would read, and honestly the first self help book I ever held in my hands, but I’m so extremely glad that I gave it a chance.

It was entertaining, original, heart-warming and inspiring without ever trying to be. Usually, books that are marketed as ‘‘inspiring’’ make me roll my eyes. I mean, they can be very corny and positive in a way that is not at all realistic.

But I bought into the ‘‘inspiring’’ elements included in this memoir, seeing that Jesse never invited the SEAL to make him look at life differently. That happens… after a while, but Jesse needed SEAL because he was losing his bold spirit. He used to be a guy who would take chances and live a precarious life full of surprises, but he eventually turned into a ‘‘creature of habit’’ as he puts it. He needed SEAL to spice things up a little and get him in shape.

What I love most about this book is that it’s not only about entrepreneur Jesse. It’s about Jesse, Sara (his wife, who is a successful businesswoman), his son and, of course, SEAL himself. If I were SEAL, I’d feel like this book was written about me. Although we rarely get SEAL’s thoughts, since he’s not a talker, Jesse tries hard to figure him out and find common interests between the two of them.

Part of me is disappointed that SEAL’s name, which was concealed throughout the story, was revealed in the extra chapter of my copy of the book, as I liked the idea of his identity remaining a mystery, but he’s a guy who deserves national or even international attention. He’s tough and he can be rude, but he’s never cruel. I could never do what he does, but I think it’s beautiful that he runs and trains for a specific purpose, which you will discover if you read this book.