A full-color revisit to the critically acclaimed steampunk hit!

Little Lucy Snow was supposed to attend a prestigious boarding school; however, a macabre twist of fate finds her enrolled instead at Miss Weaver’s Academy for the Scientifically Gifted and Ethically Unfettered, also known as Hollow Fields. Located on the outskirts of Nullsville and run by the insidious Engineers, the grim boarding school dedicates itself to raising the next generation of mad scientists and evil geniuses!

Classes include Live Taxidermy, Cross-Species Body Part Transplantation, and Killer Robot Construction. For her own survival, Lucy must master her lessons quickly. At the end of each week, the student with the lowest grades is sent to the old windmill for detention…and so far, no child has ever returned.

I feel as though I’ve been lied to. About the art, that is. Look at that cover. Notice how gorgeous it is? Well, the images inside the book are nothing like that. On a scale of one to cover, they are a three, maybe a four if I’m feeling generous.

My other problem with this manga is that it reminded me of Gunnerkrigg Court, and the truth is I much rather read that series than this one, because at least that series is mysterious and strange but the plot is not all over the place like it is the case here.

But at the same time, I am aware that this is a series for very young readers—I mean, the heroine is nine years old!—so I understand why I’m not as crazy about it as other people. However, I read books for children all the time, and this doesn’t always happen.

If the main character is extremely immature, though, I’m most likely not going to enjoy the story since I won’t be able to connect to the hero/heroine… This is why I don’t feel bad about giving up on Lucy’s adventures. She’s entertaining, I guess, because she’s silly and naïve, but I can’t take her or the world seriously enough to really care about the future of the children who were sent to detention and never came back.

Not the worst manga ever, but I’m mighty disappointed nonetheless. Read Gunnerkrigg Court instead if you want something more serious and with better illustrations.

Old, but a little more representative of the art, cover: 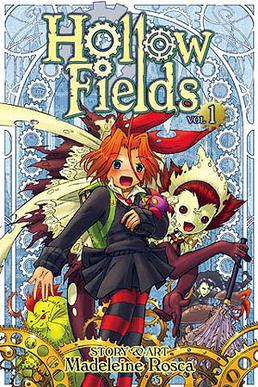