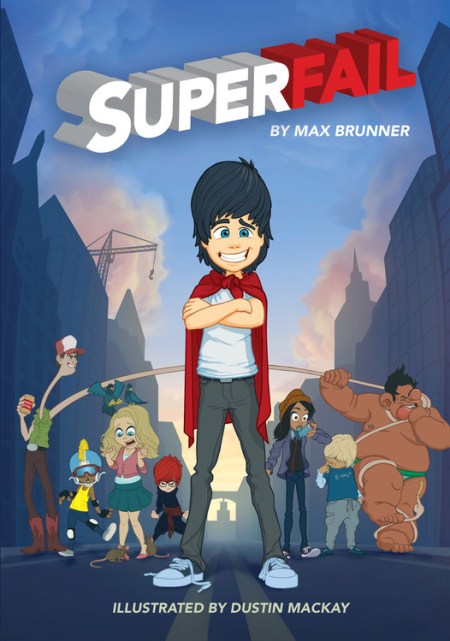 Twelve-year-old Marshall Preston is a Defective–a person with superhuman abilities that are restricted by some very human setbacks. While other kids are recruited to superhero teams, Marshall’s stuck in seventh grade with a kid who can run at super speed but can’t turn a corner, another with a radioactive peanut allergy that turns him into a swollen Hulk, and a telepath who reads everyone’s thoughts out loud.

Defectives like Marshall aren’t exactly superhero material, but when he uncovers a plot to destroy one of the greatest superhero teams of all time, Marshall and his less-than-super friends set out to prove that just because you’re defective doesn’t mean you can’t save the day.

This would make an amazingly entertaining animated movie.

It’s no wonder the illustrator works for Disney; he is extremely talented. This book is part novel and part graphic novel, and let me tell you that the graphic novel part (which is ubiquitous, thank goodness!) makes it super easy to imagine the story as a continuous movie.

I haven’t read many superhero books before. The last one I read was RENEGADES by Marissa Meyer, YA fantasy superhero story, and while it was enjoyable, I did not feel the energy that this story and these characters made me feel.

Marshall and his crew are incredibly fun. What’s special about this book is that the majority of its superheroes have some sort of defect. Yes, they have crazy awesome powers, but the powers come with a price. For instance, Marshall can fly, but gets sick every time he uses his power. Also, he has laser vision, and yet, he can’t manage to hit any of his targets and creates mayhem instead.

So you can imagine that when he and other superheroes must save the world, things do not—ever, ever—go as planned. I loved that. It made the storyline unpredictable because I could never know what damage or effect the superheroes’ defects would cause. Or how the defects could actually turn in their favour—that also happens.

It’s a book about accepting our weaknesses. Instead of being perfect, the kids are flawed, and because of that, they are all the more realistic and easy to connect with.

What a great ride.