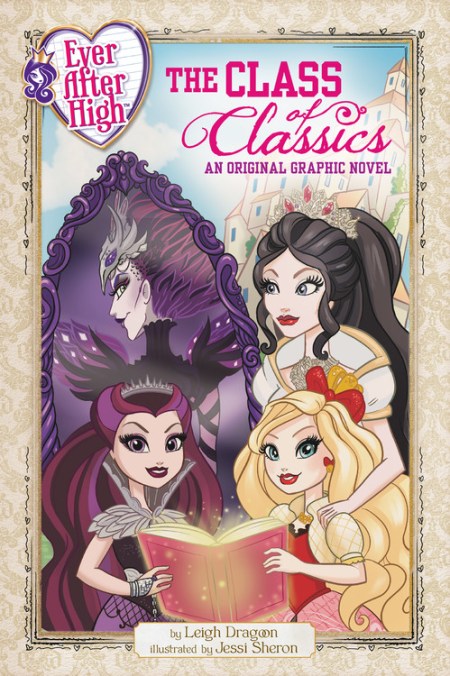 Ever After High: Class of Classics: An Original Graphic Novel by Leigh Dragoon

It’s reunion weekend for the Class of Classics, and thanks to a magical spell gone awry in the Legacy Orchard, today’s Ever After High students have a hexclusive sneak peek into their parents’ stories. Raven Queen, Apple White, Cerise Hood, Madeline Hatter, and more go on a thrilling adventure through the past that reveals what their parents were really like in high school. These six spelltacular stories, together exclusively in this full-color graphic novel, will change everything you thought you knew about the Class of Classics!

This felt so right.

I’m usually not very trusting when it comes to books or shows becoming graphic novels, but since this is ‘‘original’’ in the sense that it’s a whole new story with familiar characters, I could not pass out on the chance to read it.

And I’m delighted I read it, because I recognized the characters of the Ever After High books and episodes immediately (except for Darling, supposedly Dexter’s sister, which means that I’m behind on the episodes and/or books). They were rightly portrayed – both physically and with regards to their personalities.

I loved this. Probably because I’m behind on the episodes, I haven’t met the parents of the fairy tale children yet on screen, so it was nice to see how they behaved when they were younger and how the fairy tale parents and children compared.

There’s not much I could complain about. The illustrations do the characters and world justice and there’s just the right amount of dialogue. But this is a fan speaking, so it’s possible someone who doesn’t have Ever After High in their heart will find weaknesses to this book. Or not, as it was quite charming! *wink* *wink*