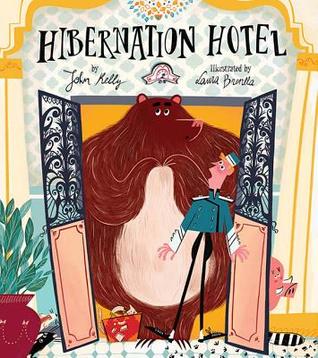 It’s time for Bear to hibernate, but he just can’t get to sleep because his cave is crowded with all of his friends. Raccoon snores, Beaver fidgets, and Skunk doesn’t exactly smell too good. So Bear gets a great idea and reserves a room at the Hibernation Hotel. “This is the life!” he exclaims, eating all the snacks he wants and bouncing up and down on the bed. But for some reason, at bedtime, he still can’t sleep. Could something be missing?

This was cute. I do like stories about animals so this was right up my alley.

But honestly, while I did find it charming and overall quite wonderfully-illustrated, to me it does not seem very logic.

Hear me out. Bear can’t sleep in his cave because his dozens of friends are crowding the place, but he says ‘‘as usual’’, meaning that it’s something he’s used to. And yet, out of the sudden, he can’t stand his friends anymore?

But I mean, let’s say it’s about wanting change—to sleep somewhere where none of his friends can follow him so he can remember what that feels like.

But hello, he just ate tons of snacks, remember?

See why I can’t find this story very logic? Also, it’s hard to find Bear endearing since he’s rather pretentious. Plus where did he get all the money to pay for the hotel and expenses? Ah okay, picture book. Let’s dismiss that question.

Though, even if Bear is not endearing per se, he is quite comic. I could imagine him as a little kid having a sudden tantrum and not being pleased with anything he’s provided with.

And this story does illustrate how greatly friends impact us as well as make you understand that sometimes you have to take a step back from everything you know to remember what’s important to you.

Not bad and, once again, amazing pictures!