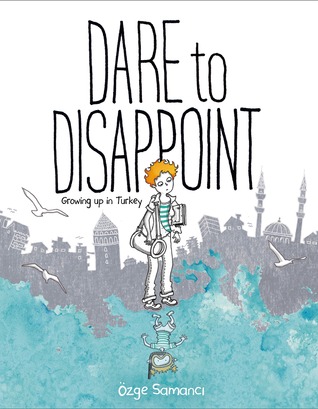 Dare to Disappoint: Growing Up in Turkey by Ozge Samanci

Growing up on the Aegean Coast, Ozge loved the sea and imagined a life of adventure while her parents and society demanded predictability. Her dad expected Ozge, like her sister, to become an engineer. She tried to hear her own voice over his and the religious and militaristic tensions of Turkey and the conflicts between secularism and fundamentalism. Could she be a scuba diver like Jacques Cousteau? A stage actress? Would it be possible to please everyone including herself?

I’m sure we’ve all read books about people who deny themselves happiness because of their parents’ expectations. Or maybe because they think that what their parents want for them will make them happy in some way in the end.

But this book is not only about that. Özge does want to please her family, especially her father, but she realizes early on that she could never become an engineer, the only profession her father deems acceptable for a woman who does not want to marry.

She doesn’t have the grades to study engineering, but she also doesn’t want to. So she turns to mathematics, hoping to still please her family who struggles so hard to give her sister and herself a good life. All along, though, what she wanted to align herself with most was the societal system itself. Not be an outsider, a rebel, a failure.

I loved how much this story focused on Özge’s education. I’m at that part in my life where I’m confused too. Who am I? Where am I going? What am I going to do? When I was in high school, I wanted to become a librarian.

Then I created my blog, and suddenly I wanted to become a book publicist, because the book publicists I’m in contact with are so wonderful, rarely stressed out and I simply enjoy gathering media attention for a book. But then I got to university, and I realized how much the education system needs great professors who are there for their students, and I thought, ‘‘Hey, maybe I could be that professor’’.

So I understood Özge’s confusion very well. Unlike her, I never felt the need to please one of my parents, because my dad passed away and my mom, who is a chief nurse, saw quite early on that science and I do not connect. She used to see me as a lawyer, but I feel too much what others are feeling to become one, which I explained to her.

I’m happy Özge didn’t go through this alone, however. She and her (older) sister would help each other and support one another. In fact, I don’t think I remember reading about them fighting. That is a healthy relationship to have with a sibling. It’s rare, but it happens. Özge and her sister are always together, so it’s only natural for the former to want to attend the same school as her sister. My brother and I certainly fight, but when I was young and we attended the same school, we would hang out together during lunch and I would try to get his attention surreptitiously as I went to the bathroom. I would wave or make silly faces through the door window.

I was bound to love this book.