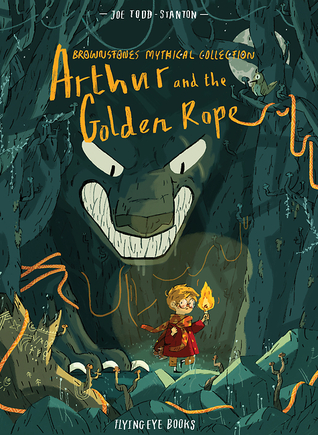 The Brownstone’s Mythical Collection: Arthur and the Golden Rope by Joe Todd Stanton

Imagine a vault so cavernous that it could contain all the world’s greatest treasures and relics, from mummified remains of ancient monarchs to glistening swords brandished by legendary warriors. Who could be in charge of such a vault and how did he come into possession of such a unique collection? Who is…Professor Brownstone?

I adore rooting for underdogs, because they can be very surprising. There will always be heroes born heroes, that’s true, but other heroes become heroes along the way, not because they were born to save the world and it shows, but because they decided to save it on their own.

Arthur is not your stereotypical hero. He is small, quirky, introverted and quiet. People notice him right away, but only because he is different than other people in his village. The villagers find him strange, but if following one’s dreams means being labelled as strange, well there are worse things in life.

Arthur is an adventurer. He seeks adventure everywhere he goes, and in every place he explores, he finds creatures to help and quests to complete. His most challenging one to date is helping capture a beast that terrorizes the land. But how will he, the little boy that he is, manage to achieve such a goal?

Thankfully, he is provided with somewhat meaningful advice from Thor, the god of storms, and already possesses magical items handed to him by different beings of the forest. But it’s up to him to save the day. He is on his own for the most part. In fact, he could walk away and forget about it all, but he is a true adventurer, and let’s not forget that Thor and many other people depend on him.

Wonderful illustrations that really make the reader feel part of the world. I enjoyed the mythology and different characters. The narration could have been more enchanting and/or poetic, since it is entirely simple and unmoving. Fortunately, Arthur makes up for that with his charming demeanour and surprising actions. Great ending.