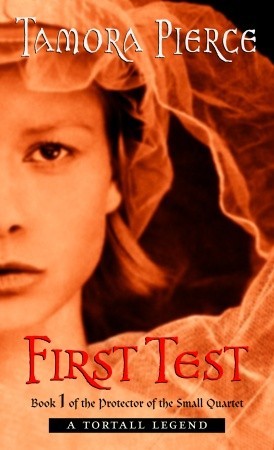 In the medieval and fantastic realm of Tortall, Keladry of Mindelan is the first girl to take advantage of the decree that permits females to train for knighthood. Up against the traditional hazing of pages and a grueling schedule, Kel faces only one real roadblock: Lord Wyldon, the training master of pages and squires. He is absolutely against girls becoming knights. So while he is forced to train her, Wyldon puts her on probation for one year. It is a trial period that no male page has ever had to endure and one that separates the good natured Kel even more from her fellow trainees during the tough first year. But Kel Is not a girl to underestimate, as everyone is about to find out…

This is my first book/series from Tamora Pierce, meaning that I did not read her Song of the Lioness series prior. However, although Alanna, and as I discovered, multiple other characters from the author’s other books in the same world are mentioned, I did not feel as though there was something I was missing to enjoy this particular story.

Actually, because Alanna was mentioned so many times, I now feel very interested in picking Pierce’s Song of the Lioness up. Though it’s true there are some spoilers in this series, so I would say read it after Song of the Lioness, or before, if it’s not that problematic for you. It wasn’t for me.

This is the story of a girl who wants to become a knight. For that to happen, Kel must be trained by the King’s trainer, who dislikes her. Unfortunately, even if girls are technically allowed to become knights now, because of Alanna, they are not exactly welcomed to pursue a path that is believed to be reserved for men by many.

But Kel is ready to face the prejudices. She feels it in her bones that this is what she is meant to do. Kel couldn’t have been a better heroine. She is strong, ready to prove to everyone how wrong they are about her. But the best part is, she doesn’t dismiss her feminine side, so as to look ‘‘tougher’’ or ‘‘manly’’. Indeed, she wears dresses from time to time and shows sympathy towards both humans and animals.

Because everyone has, at one point or another, been misjudged, underestimated and perhaps bullied or discriminated against, it’s easy for the reader to connect with Kel and invest themselves in the story.

I want to point out that Kel is ten years old, but that this is more Young Adult than Middle Grade. It is serious and complex, plus the characters she interacts with are usually much older.

Really enjoyed. Eager to read the rest of the series.

2 thoughts on “Protector of the Small: First Test”