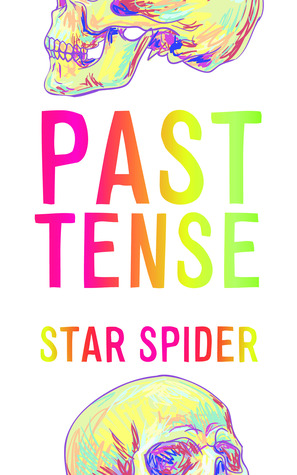 Past Tense by Star Spider

Julie Nolan is a pretty average girl with pretty average problems. She’s been in love with her best friend, Lorelei, ever since they met in grade three. Only Lorelei doesn’t know about it — she’s too busy trying to set Julie up with Henry, her ex, who Julie finds, in a word, vapid.

But life gets more complicated when Julie comes home to find her mother insisting that her heart is gone. Pretty soon it becomes clear: Julie’s mom believes that she has died.

How is Julie supposed to navigate her first year of high school now, while she’s making midnight trips to the graveyard to cover her mother with dirt, lay flowers and make up eulogies? And why is Henry the only person Julie feels comfortable turning to? If she wants to get through this, Julie’s going to have to find the strength she never knew she had, and to learn how to listen to both her mom’s heart and her own.

Julie, the main character, grows on you. The first page is irksome, because she proudly admits her teacher is in love with her, and that is not something to be happy or boastful about.

But Julie receives a slap in the face early in the book, and this particular slap that concerns her mother, too, starts to make her look at her family and friendship with Lorelei differently.

You see, her mother thinks she is dead, so she makes Julie drive to graveyards, talk about her in past tense, and lie to her dad about it… Actually, because of Julie’s mother’s behaviour, I felt as though there was magical realism in this story.

But there isn’t. It’s simply a feeling, though not an unreasonable one, seeing that I have never encountered such a character before in my reads. The ending, though, makes it clear that this was no magical realism story.

Lorelei is a manipulative girl. Given her family’s relationship with religion, you’d think she’d be less selfish and party/boy-focused. I often prayed for that moment Julie realizes her best friend is not her best friend after all to arrive.

Overall, this is an emotional story. Lorelei makes it hard to enjoy it more than I did, because she is shallow and has all the wrong priorities. Fortunately, Julie’s character development is admirable and seeing how much she cares for her mom warmed my heart. She needs help. It takes time for Julie to realize that, mostly because she doesn’t want her family to fall apart.

Although I haven’t mentioned him so far, there is another very important character in this story: Henry, Lorelei’s ex-boyfriend and another character who grows on you. That’s all I’ll say, however, because the rest you must discover.

Enjoyed. Quite fast-paced, emotional and well-written.