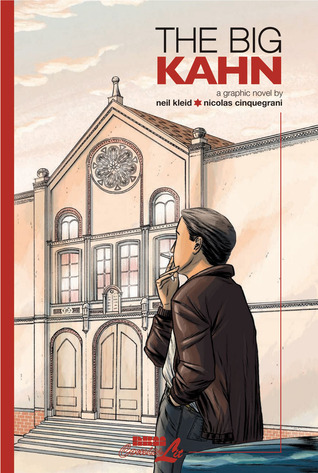 The Big Kahn: A Sequential Drama by Neil Kleid

Rabbi David Kahn has lived a forty-year lie: he is not, nor has he ever been, Jewish. When at his funeral, the “rabbi’s” grifter brother reveals the truth, it forces the Kahn family to struggle with grief and betrayal as their congregation examines their every move and question their very faith. His son, Rabbi Avi Kahn, the heir apparent, spirals down in an affair with his rebellious sister Lea’s non-Jewish roommate. Lea rethinks the religion she’s run from, strong enough to alter her father’s life, while Eli — the youngest Kahn —  inherits his father’s long-forgotten legacy. Somehow, with the help of the uncle he never knew and his slowly re-awakening sister, he attempts to return faith and order to his family and community and reinstate his father’s good name. Neil Kleid, Xeric Award winning author of Ninety Candles and NBM’s Brownsville, and illustrator Nicolas Cinquegrani offer a drama about loss, lies, belief and renewal in this dramatic graphic exploration of a family secret so well-hidden, it questions the very nature of faith.

I found this story so interesting, because it was so very different from what I’m used to reading about, and I love diversity in my reads.

This is a graphic novel about the family of a Rabbi who recently died. The Rabbi was quite respected and beloved, therefore when the family and the rest of the Jewish community learn that the Rabbi was in fact Christian and lied about it, everyone is shocked.

Well the Rabbi did, of course, eventually convert to Judaism, because he really did believe in all the truths that he spoke about, but it remains that he lied to everyone and, in the beginning, pretended to be a Rabbi in order to manipulate people and get what he wanted.

I don’t know about you, but I’ve never read anything like this before, so I thought the storyline was original. I was curious about the characters’ reactions to the revelation – especially the family’s – and I was not disappointed.

Actually, most reactions were extremely intense, because not one member of the family took the Rabbi’s lie mildly, therefore I wondered sometimes if the reactions were realistic, but I wouldn’t know, having never grieved for anything besides a hamster. They just seemed exaggerated from time to time.

I liked that the circle of lie was broken towards the end, and you’ll know what I mean if you read it and I actually learned some things about Judaism while reading this graphic novel. That’s fantastic, because I always welcome knowledge in my life.

Emotional. Honest. Interesting. Original. But perhaps a little unrealistic at times with the exaggerated reactions of the characters. Though this is called ‘‘a sequential drama,’’ so it’s true I should have expected it maybe.