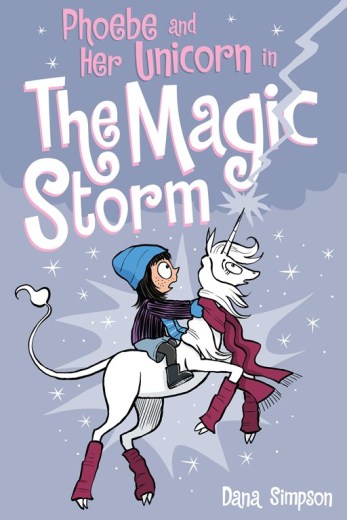 The Magic Storm by Dana Simpson

Phoebe and Marigold decide to investigate a powerful storm that is wreaking havoc with the electricity in their town. The adults think it’s just winter weather, but Phoebe and Marigold soon discover that all is not what it seems to be, and that the storm may have a magical cause. To solve the case, they team up with Max, who is desperate for the electricity to return so he can play video games, and frenemy Dakota, who is aided by her goblin minions. Together, they must get to the bottom of the mystery and save the town from the magic storm.

I have a feeling Heavenly Nostrils will never be the same again, but I quite like where this series is going.

The previous five volumes featured the same characters that are included in this sequel, but the story has changed. Indeed, before, Phoebe and Marigold were seen interacting mostly in these slice of life-themed scenes, but now there is actually a clear *storyline* that can be followed. Fortunately the witty comments remain! 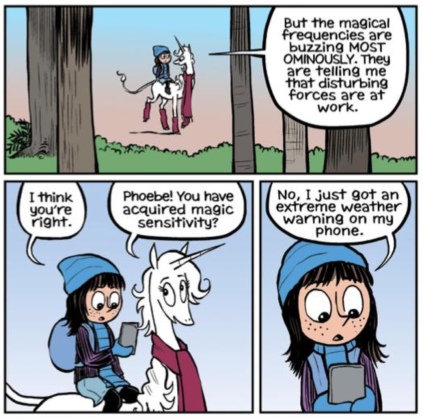 There is a problem here. There is no more power, so no more light and no more magic. Marigold can’t help because without her magic she is just a really cool horse-like creature. But that’s not going to stop Marigold, Phoebe and her friends from trying their best to bring the power back.

I’m glad this series switched directions in regards to the content, because it’s much more interesting to read a book with a defined, though I’m not saying predictable, plot. Not that I had any trouble being pulled in by the previous volumes, but this is a nice change.

Unfortunately, I don’t find the graphics as charming as the previous ones, although I’m referring to the backgrounds more than anything else. They are rarely detailed, usually just coloured with one or two colours and voilà! That’s a bit cheap in my opinion.

Everything else is wonderful: the interactions between the characters, the atmosphere and dialog and the idea behind this book.