Acclaimed creator Kaoru Mori (Emma, Shirley) brings the nineteenth-century Silk Road to lavish life, chronicling the story of Amir Halgal, a young woman from a nomadic tribe betrothed to a twelve-year-old boy eight years her junior. Coping with cultural differences, blossoming feelings for her new husband, and expectations from both her adoptive and birth families, Amir strives to find her role as she settles into a new life and a new home in a society quick to define that role for her.

Ending on a cliffhanger is a fantastic marketing technique, especially since it amplifies the reader’s excitement for the next book.

But if I did not have the second volume in my possession right now, I would be so darn mad at A Bride’s Story, or more precisely at Kaoru Mori, the author, for doing this to me.

This is quite different from other manga stories I have read in the past. For starters, it does not focus on the romantic relationship between the two main characters. Moreover, It does not focus on action, adventure or fantasy elements.

Instead, it illustrates the clash of two cultures and the beginnings of a union. Amir is a twenty-year-old bride who marries a twelve-year-old boy of a tribe different from hers. The two have varied customs and behaviours. But although Amir is intimidated at first, she is set on finding her place among her new family. 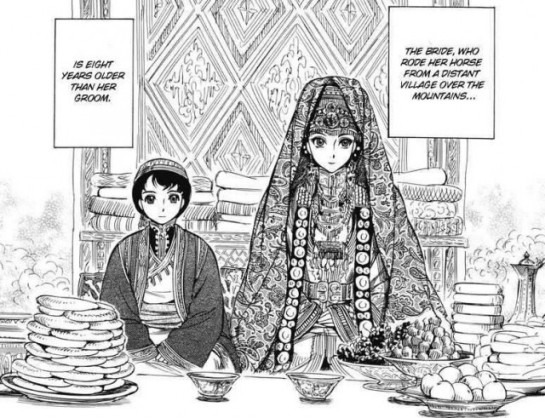 Except, her former family wants her back.

The visuals are absolutely stunning. I could not find a single flaw there. Everything is so detailed, from the landscape to the houses to the delicate embroidery on the women and men’s clothes. There is much to be admired.

Most of all, I loved Amir. She is reasonably obedient, meaning that she will not comply with orders that go against her personal values, even if others do not agree with them. She is strong and proves herself to be resourceful.