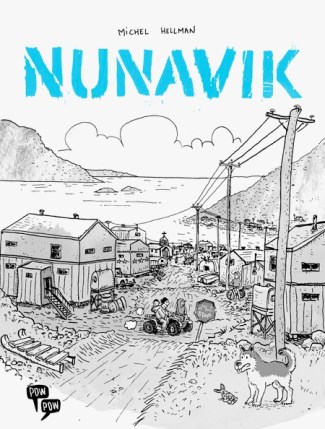 Author Michel Hellman meets with his editor Luc Bosse and casually promises to write a sequel to his best-selling book Mile End. But the Montreal neighborhood, with its trendy cafes and gluten-free bakeries, doesn’t seem half as inspiring as it used to be. Part memoir and part documentary, Nunavik follows Hellman on a trek through Northern Quebec as he travels to Kuujjuaq, Puvirnituk, Kangiqsujuaq and Kangirsurk, meeting members of the First Nations, activists, hunters and drug dealers along the way. An honest and often funny account of this trip, Nunavik truly feels personal, with the author acknowledging (and challenging) his own prejudices. While the North has had a profound influence on our collective identity as Canadians, it remains an idea – myth rather than reality. Empirical rather than theoretical, Nunavik reflects on the way our relationship to the North has shaped our own cultural landscape.

I am someone who likes learning about cultures, countries, people and the world in general from other people, through conversation mainly. To me, having someone explain a concept is worth a thousand books. There is room for questions and clarifications.

This is why I rarely read non-fiction books. But graphic novels, whether fictive or non-fictive, I do. NUNAVIK is Michel Hellman’s account of his Northern Quebec explorations. He went there with a certain idea in mind regarding the appearance of the Inuit, how they live and behave, only to realize how different reality is.

This is not someone writing to you about Nunavik and its people with the vocabulary of a university professor (and let me tell you sometimes you just want to smack the pretentiousness out of them). No, this is a man who knows close to nothing about the Northern Quebec who goes there to see for himself what this place is about, because Montreal streets do not inspire him as much anymore.

He is confused, he is shocked and he is pleased as well as displeased. One can read about a place and feel as though they have been there themselves, but it’s only through real life traveling that we can interact with the population of a community and let them tell us about their lives. This is what Michel Hellman is doing: he is exploring Nunavik and listening to anyone who can shed light on what Michel himself does not understand.

I enjoyed being able to learn with the author himself. We know little, but so does he. It is as though the author and the reader are traveling together. He is aware of his own judgments and prejudices and is trying to think with a clear mind, let the people teach him what he should know. I have learned much about this curious place. It is definitely different from the rest of Quebec, but as an Inuk said, the Inuit “are not so different from [us]”. They adapt. They survive. As their environment changes, so do their interactions with it.

I just realized, my Environmental Anthropology professor would love this graphic novel. Too bad I’m keeping it.