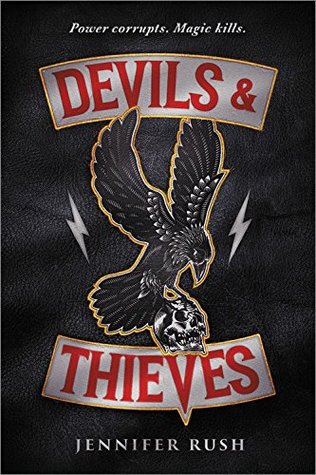 Eighteen-year-old Jemmie Carmichael has grown up surrounded by magic in the quiet town of Hawthorne, New York. In her world, magic users are called “kindled,” and Jemmie would count herself among them if only she could cast a simple spell without completely falling apart. It doesn’t help that she was also recently snubbed by Crowe, the dangerous and enigmatic leader of the Black Devils kindled motorcycle gang and the unofficial head of their turf.

When the entire kindled community rolls into Hawthorne for an annual festival, a rumor begins spreading that someone is practicing forbidden magic. Then people start to go missing. With threats closing in from every side, no one can be trusted. Jemmie and Crowe will have to put aside their tumultuous history to find their loved ones, and the only thing that might save them is the very flaw that keeps Jemmie from fully harnessing her magic. For all her years of feeling useless, Jemmie may just be the most powerful kindled of all.

Could this book get even worse?

Maybe so, but I don’t care to read the last hundred pages. No more nonsense for Lola. Got to take a break from it all.

The world building is so underdeveloped and unoriginal. There are families that have power, but Jemmie can only smell power.

Smell power. Smell power. It doesn’t matter how many times I say it, it’s never going to sound natural to my ears.

But anyway, that’s not it. So Jemmie is in love with her best friend’s brother (cliché) but she’s going out with some other guy (coward), but her BFF disappears and she grows closer to her brother (why, of course).

She is so arrogant. She oozes anger and defensiveness. She is angry at the world—her father for leaving, Crowe for ignoring her, people with power for having power. She can’t be happy until people around her are unhappy. She drinks like she’s a grown-up (which she’s not).

I didn’t like her. Or the other characters. They are one-dimensional and forgettable. This whole book had no amount of interesting elements in it. It’s a mashed potato of clan fights, random powers and teenage drama.