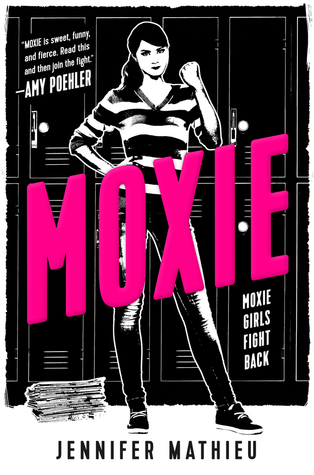 Vivian Carter is fed up. Fed up with a school administration at her small-town Texas high school that thinks the football team can do no wrong. Fed up with sexist dress codes, hallway harassment, and gross comments from guys during class. But most of all, Viv Carter is fed up with always following the rules.

Viv’s mom was a tough-as-nails, punk rock Riot Grrrl in the ’90s, and now Viv takes a page from her mother’s past and creates a feminist zine that she distributes anonymously to her classmates. She’s just blowing off steam, but other girls respond. As Viv forges friendships with other young women across the divides of cliques and popularity rankings, she realizes that what she has started is nothing short of a girl revolution.

Not long ago, I wrote an essay on the importance of feminism to various groups of people today and presented it to the class. The response was overwhelmingly positive and sparked different discussions.

The teacher was surprised. He looked at me and said, ‘‘This is how every oral presentation should go.’’ But then immediately after, as if really thinking about the issues I presented, he asked, ‘‘But are you girls, at your age, really affected by unfeminist behaviours?’’

The girls of our class (there were only two boys), myself included, were speechless for a second, and then a girl spoke up. ‘‘Well, we’re girls, so of course we’re affected by sexism,’’ she said and I could have applauded her for it. Perfect answer.

My teacher was not sexist, but he was not a woman. His question proves that there is much he doesn’t understand about the hundred ways in which men can be sexist towards women. MOXIE is a book he should read.

MOXIE is a book everyone should read. Just like THE HATE U GIVE, another fiction story full of powerful, revolutionary themes that feels all too real, it is important, revealing, poignant and extremely touching.

I have an issue with it, however. While Vivian grows a lot, throughout the novel—she gain courage, strength and determination—there still seems to be stereotypical thinking she condones that she isn’t aware of, for instance, waiting for the guy to kiss the girl first (isn’t feminism about empowering women?) and wanting to go out with a guy taller than she is (come on, we must get rid of this thinking that men should always be taller!).

It could have had more dept also, but it’s a very good feminist YA novel. There should be more books like this one.