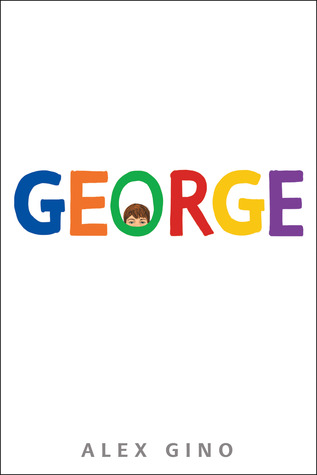 BE WHO YOU ARE. When people look at George, they think they see a boy. But she knows she’s not….

I want to hug this book. I also want to hug George. Not only is this middle grade book heart-warming and engaging, it’s also eye-opening and important. Sadly, there are few books out there for children with transsexual characters, let alone main characters.

This book and GRACEFULLY GRAYSON are very similar. They don’t read the same way exactly (I enjoyed the former better), but they both deal with young transsexual characters who want desperately to be themselves but fear the reaction of others around them. Still, they both muster their courage and audition for female characters in their school plays.

I did find this book to be more enjoyable, although both of them deal with the same subject, because GEORGE is beautifully written and realistic. Unlike the character in GRACEFULLY GRAYSON, George ******spoiler alert****** doesn’t get the part so she has to find another way to show everyone—including her mother—that she is a girl, not a boy.

George is, of course, a darling. Even if her situation frustrates her—she wishes it could be easier for people like her to be who they truly are—she doesn’t let that depress her. I was so glad she had a supportive friend by her side at all times, because I think it’s very important to have someone who understands you when nobody else does. Everyone deserves a good friend.

I read this book in two hours. The writing is big and the story itself is short. It’s for the best, since this way the story is not repetitive and it makes us want to finish the book sooner rather than later. I hope there is a copy of GEORGE in every middle school. Maybe it’s a wishful thought, but I at least hope someday there will be.