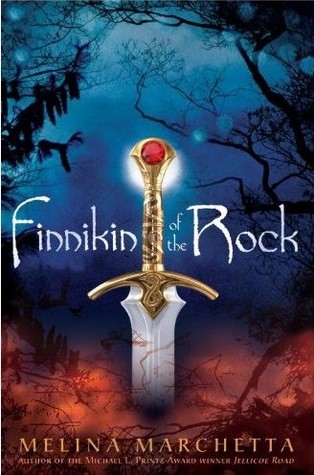 Finnikin of the Rock by Melina Marchetta

At the age of nine, Finnikin is warned by the gods that he must sacrifice a pound of flesh to save his kingdom. He stands on the rock of the three wonders with his friend Prince Balthazar and Balthazar’s cousin, Lucian, and together they mix their blood to safeguard Lumatere.

But all safety is shattered during the five days of the unspeakable, when the king and queen and their children are brutally murdered in the palace. An impostor seizes the throne, a curse binds all who remain inside Lumatere’s walls, and those who escape are left to roam the land as exiles, dying by the thousands in fever camps.

Ten years later, Finnikin is summoned to another rock–to meet Evanjalin, a young novice with a startling claim: Balthazar, heir to the throne of Lumatere, is alive. This arrogant young woman claims she’ll lead Finnikin and his mentor, Sir Topher, to the prince. Instead, her leadership points them perilously toward home. Does Finnikin dare believe that Lumatere might one day rise united? Evanjalin is not what she seems, and the startling truth will test Finnikin’s faith not only in her but in all he knows to be true about himself and his destiny.

Trying to rate this book has me pulling at my hair. It’s hard. So hard. Why is it such a difficult thing? It was fascinating, realistic and definitely well-written.

But before I could find it fascinating, realistic and well-written, I had to read around one hundred so-very-slow pages.

I think it’s amazing when a book suddenly gets better, as if some spell had been cast on us to finally see the magic of it. And on the twin bright side, I do have as feeling that I won’t have the same experience with the next two books in the series.

The real problem is that it took me a long time to see the characters as real people. Before the hundredth page, they were just lovely, original names on paper, nothing more. They don’t share much about themselves, and so, it was hard for me to find anything we have in common.

But I eventually did. As the story progresses, we meet more characters who are either important to the plot or are connected somehow to the main ones. Sometimes both. These connections make Finnikin, Sir Topher and Evanjalin open up on their pasts, life experiences and fears.

I felt somewhat out of breath when I turned the last pages; I’m not going to lie. Not because it’s rather super slow-paced and there’s quite a lot of walking done by the characters (they should learn to run sometime), but because there’s so much heartache, so much sadness, so much struggling to do the right thing. It’s exhausting at some point. But oh so very admirable and beautiful in a way.

I commend anyone who has read this book. It isn’t easy. It’s like reading five books in one. I can only imagine how much time and effort the author has put in it. I commend her, too.

5 thoughts on “Finnikin of the Rock by Melina Marchetta”