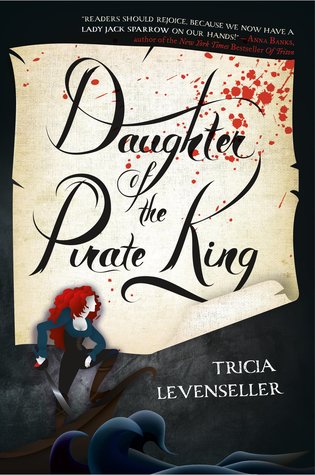 Daughter of the Pirate King by Tricia Levenseller

When the ruthless pirate king learns of a legendary treasure map hidden on an enemy ship, his daughter, Alosa, knows there’s only one pirate for the job—herself. Leaving behind her beloved ship and crew, Alosa deliberately facilitates her own kidnapping to ensure her passage on the ship, confident in her ability to overcome any obstacle. After all, who’s going to suspect a seventeen-year-old girl locked in a cell? Then she meets the (surprisingly perceptive and unfairly attractive) first mate, Riden, who is charged with finding out all her secrets. Now it’s down to a battle of wits and will . . . . Can Alosa find the map and escape before Riden figures out her plan?

Pirates are definitely not popular in YA literature.

But they should be! At least a little more. Because pirates are so interesting. Also practically extinct in real life, which makes them all the more fascinating in books.

Alosa is not just any pirate. She is the daughter of the pirate king, as the title very clearly states. But more than that, she has a certain special ability that makes her almost unbeatable.

She’s on a mission for her father. Will she find the map she so fervently seeks? Will orchestrating her own kidnapping get her anywhere? Will Riden or Draxen discover her true nature?

The tone of this story is not so serious. It’s like it’s parodying its own story. Alosa is so sure of herself, so skilled and so cunning that you feel her high amount of confidence in every sentence.

I personally liked her. She’s entertaining. Almost like a female version of Captain Jack Sparrow, except a little more down to earth than he is – and arguably deadlier!

The story starts in quite an intriguing way. Alosa’s kidnapping engaged my interest at the speed of light. I found myself enjoying her intrepid nature and indifference at putting herself in danger’s way.

It’s when the romance started appearing that my interest waned. Not much, but enough not to be able to give this a full four-star-rating. I personally think the romance is too prominent. If only it played less of a grand role. If only Alosa hadn’t fallen for *him* so fast and so deeply.

The writing is fantastic, though. And so is the pacing. Things are moving fast for sure. No need to slow them down either, since time is a factor here. Alosa can’t remain prisoner for ever. She has to report to her father soon.

I absolutely think this makes for an enjoyable read to be read in an afternoon. Again, kind author, why the mountainous amount of romance? I’m not even sure I’m exaggerating here. But anyway, pirates kick ass. Can’t help but love ’em. Aye. Aye.

2 thoughts on “Daughter of the Pirate King by Tricia Levenseller”