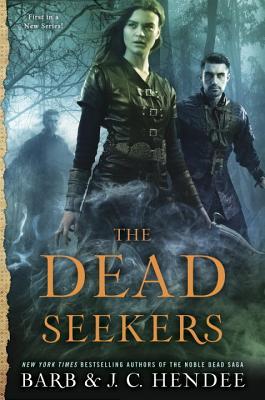 The Dead Seekers by Barb Hendee

In the dark reaches of the eastern continent, Tris Vishal travels from village to village, using his power to put unsettled spirits to rest. He works alone, having learned that letting people close only leads to more death. Still, he finds himself accepting the help of the Mondyalitko woman who saves his life a woman whose gifts are as much a burden as his own.

Mari Kaleja thirsted for vengeance since the night her family was taken from her. She has searched far and wide for the one she thinks responsible, known only as The Dead s Man. But before she can kill him, she has to be sure. Mari hopes traveling with Tris will confirm her suspicions. But as they embark on a hunt where the living are just as dangerous as the dead, she learns the risks of keeping your enemy close…

Because it s no longer clear who is predator and who is prey.

This is a light enough fantasy book that it can easily be read without it requiring much from the reader, except for their attention.

Tris can see, interact with and control the dead. He is known as ‘‘the Dead’s Man.’’

Mari’s parents died, and Mari thinks the Dead’s Man has to do with that.

So now that the both of them are together, heading to who-knows-where on an adventure, she has countless occasions to slit his throat.

But Mari wants to be sure he was the one who killed her parents before carrying on with her revenge plan.

I personally think the whole taking revenge against the ones who caused my parents’ demise is getting old. Some books center on that only but are being creative about the world so much that I don’t mind it.

THE DEAD SEEKER doesn’t have a complex world building.

But what it does have is two very loveable main characters who do not jump on one another twenty pages after they met, although Tris sees Mari naked in the first couple of pages.

That is great. Another great thing is the little mystery cases as part of the plot that have to do with bad ghosts.

It’s definitely fast-paced and entertaining, but I wouldn’t be quick to compare it to GAME OF THRONES or any other complex fantasy series.