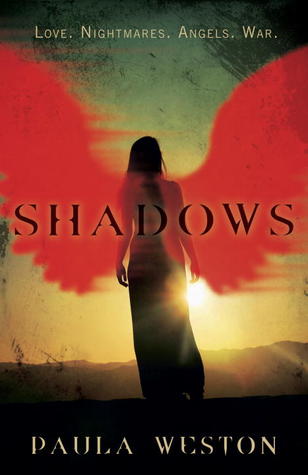 It’s almost a year since Gaby Winters watched her twin brother die. In the sunshine of a new town her body has healed, but her grief is raw and constant. It doesn’t help that every night in her dreams she fights and kills hell-beasts. And then Rafa comes to town. Not only does he look exactly like the guy who’s been appearing in Gaby’s dreams, he tells her things about her brother and her life that cannot be true, things that are dangerous. Who is Rafa? Who are the Rephaim? And who is Gaby? The truth lies in the shadows of her nightmares.

Although it’s pretty clear the inspiration behind SHADOWS comes from Cassandra Clare’s THE MORTAL INSTRUMENTS series, because there are countless similarities, I quite enjoyed this world.

It’s a fast-paced, action-packed story of angels, angel offspring (Nephilim), demons and hellions (controlled by demons) as well as humans who unintentionally get mixed up in the war.

I genuinely enjoyed my time with this book. I don’t know if it’s because I’m a huge fan of THE MORTAL INSTRUMENTS, so I was bound to like this from the start, but it’s so action-packed (everything is always moving) that I didn’t have time to get bored. Not that I wanted to.

I wasn’t much attached to the characters, though I didn’t mind them. But I certainly would not mind if any ended up dead. In fact, I would welcome a possible future death with open arms. I admit that this is an entirely morbid thought, yet I can’t help but have it. There are tons of characters, so a death can make things even more interesting without disrupting the story exactly.

You need to be warned about this: there is insta-love. I wanted to warn you because there’s mention of romance in this series, so I wanted you to know that it’s not of the swoon-worthy type like you may be anticipating. But it’s not ever-present, so don’t worry. At the same time, there is a square-romance going on (meaning three love interests), so get ready for that too.

I’m curious about the sequel. Now that we know a *little* more about Jude and what may have happened to him, I foresee some potentially interesting scenes.

3 thoughts on “Review Shadows (The Rephaim #1) by Paula Weston”