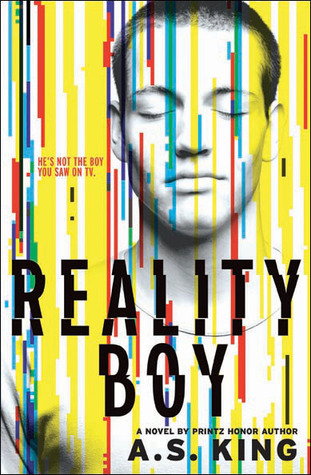 Gerald Faust knows exactly when he started feeling angry: the day his mother invited a reality television crew into his five-year-old life. Twelve years later, he’s still haunted by his rage-filled youth—which the entire world got to watch from every imaginable angle—and his anger issues have resulted in violent outbursts, zero friends, and clueless adults dumping him in the special education room at school.

Nothing is ever going to change. No one cares that he’s tried to learn to control himself, and the girl he likes has no idea who he really is. Everyone’s just waiting for him to snap…and he’s starting to feel dangerously close to doing just that.

In this fearless portrayal of a boy on the edge, highly acclaimed Printz Honor author A.S. King explores the desperate reality of a former child “star” who finally breaks free of his anger by creating possibilities he never knew he deserved.

This is my least favourite A.S. King book.

Yet I still enjoyed it, which shows how talented this author is.

It’s definitely original. A.S. King introduces us to Gerald and his family who used to have their own reality TV show.

So when Gerald was a kid, he was constantly watched and broadcasted all over the country. He’s particularly known as the kid who would spontaneously crap in random places.

What great entertainment for viewers. But no one knows how hard this has been on him, how cruel his sister Tasha can be. No one has his back. Definitely not his mother.

So it is indeed very interesting. So why only three stars? Why was it not amazing?

Well, although it’s peculiar in the best possible way, it’s also repetitive. I especially got tired of the bullying among family members, more precisely Tasha bullying Gerald. I could see Tasha had problems, but I just couldn’t believe no one would do anything to help her get better.

And Gerald and Tasha are constantly fighting. Now less than when they were younger, thank god, but since we’re given glimpses of those scenes as well, the fighting it ubiquitous, or so I felt.

And meh, the romance is not great. I’m going to say it, I sure hope A.S. King doesn’t plan on becoming a romance writer. She’s great at creating stories that no one else would think of, but romance is not her forte.