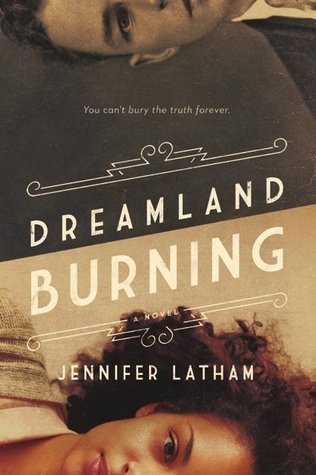 Some bodies won’t stay buried.
Some stories need to be told.

When seventeen-year-old Rowan Chase finds a skeleton on her family’s property, she has no idea that investigating the brutal century-old murder will lead to a summer of painful discoveries about the past… and the present.

Nearly one hundred years earlier, a misguided violent encounter propels seventeen-year-old Will Tillman into a racial firestorm. In a country rife with violence against blacks and a hometown segregated by Jim Crow, Will must make hard choices on a painful journey towards self discovery and face his inner demons in order to do what’s right the night Tulsa burns.

Through intricately interwoven alternating perspectives, Jennifer Latham’s lightning-paced page-turner brings the Tulsa race riot of 1921 to blazing life and raises important question about the complex state of US race relations – both yesterday and today.

This is so very different from Jennifer Latham’s debut novel, ‘‘Scarlett Undercover,’’ which I just couldn’t bring myself to finish.

A good different, obviously. A different that made my jaw drop. Because this is the kind of book I always welcome with open arms to the world.

Present day Tulsa – A body is found on Rowan’s family’s property. Who is it? Was a murder committed? What has Rowan gotten into? With the help of her asexual (awesome!!) friend James, she begins to dig around for the truth.

1921 Tulsa – William starts a fight with a black man for touching his love interest. A commotion follows. Later, the black man is beat to death. Although he believed his actions were normal, given the common belief that blacks were lesser beings, his worldview gradually shifts as he is faced with many truths of 1921 Tulsa and the approaching race riots.

You may have noticed, I described William’s part of the story a little more than Rowan’s. That’s because his chapters are the most interesting ones. Rowan plays a big role in discovering who the skeleton belonged to, but William provides us with so much information about what led to someone dumping a body on Rowan’s family’s property that without his chapters the mystery would make no sense.

Also, this novel is a lot about pointing truths about racial equality (is it a true thing? Does it exist? Is our present day any better than the past? Was there some change?) but it’s also a coming-of-age story both for the two main characters and the reader, too.

‘‘Dreamland Burning’’ is supposed to make the reader think, question himself as well as our society. You know, a couple of months ago, I read an article about Mass Incarceration being the new Jim Crow, so I sure don’t think things are perfect today.

Rowan is a character that is easy to relate to, because she is somewhat of an idealist and it’s no secret that not many are aware of all the significant historical events that took place and influenced today’s laws and worldviews.

She’s black, but she’s rich, biracial and has everything she needs. Many are not as lucky as she is. She is cared for and extremely protected, having a lawyer as a mother and a white daddy. Discrimination is not something she is preoccupied with, but the more she does research about the skeleton, the more she realizes some things about life in general and the people who surround her, in link with racial discrimination & equality.

I was wrong to say, earlier, that this is a coming-of-age story. It’s more powerful than that. It’s an awakening of a sort. Rowan is not only changed by the events in this book, she is SHAPED into a courageous human being that will do many courageous, great things in her future.