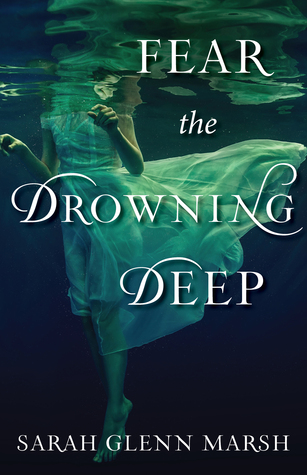 Witch’s apprentice Bridey Corkill has hated the ocean ever since she watched her granddad dive in and drown with a smile on his face. So when a dead girl rolls in with the tide in the summer of 1913, sixteen-year-old Bridey suspects that whatever compelled her granddad to leap into the sea has made its return to the Isle of Man.

Soon, villagers are vanishing in the night, but no one shares Bridey’s suspicions about the sea. No one but the island’s witch, who isn’t as frightening as she first appears, and the handsome dark-haired lad Bridey rescues from a grim and watery fate. The cause of the deep gashes in Fynn’s stomach and his lost memories are, like the recent disappearances, a mystery well-guarded by the sea. In exchange for saving his life, Fynn teaches Bridey to master her fear of the water — stealing her heart in the process.

Now, Bridey must work with the Isle’s eccentric witch and the boy she isn’t sure she can trust — because if she can’t uncover the truth about the ancient evil in the water, everyone she loves will walk into the sea, never to return.

It’s with a tremendous amount of excitement that I began reading this story, one I very much anticipated for the past few months.

That’s right, I’m a sucker for everything witch-related.

Which is why I wanted to cry when I realized it wasn’t going to be a main focus. Bouhouhouhouh.

It’s not about Morag or Bridey’s apprenticeship. For the record, at first it’s more of a magical realism theme that is being presented than a head-on ‘‘magic’’ one so, consequently, Bridey being the town witch’s apprentice isn’t much more exciting than that. Then, of course, as it gets more intense and Bridey falls deeper into the mystery, a strong paranormal theme makes its apparition.

What it IS about is the disappearances. The girls and women who unexpectedly disappear, often during night, never to be seen again. What happened to them? Did they fall off the cliff? What malefic force is behind these horrors? Be gone, devil!

Because Bridey’s granddad was sadly a victim of the supernatural forces Bridey believes are haunting the sea, she slowly starts to get more and more involved in finding out the truth when it looks like darkness made its way into town.

With the help of Fynn. Whom she just met. Naked. And kissed.

Sigh. B-but, there’s a lot of good, too! The setting, for instance, is original. I could definitely imagine those eerie hills and strange creatures. A haunting atmosphere can be felt throughout the story. Marsh’s writing style captivated me without a doubt.

While it’s true that I anticipated more scenes involving witchcraft or witchery activities, if your turn-on is paranormal mystery, you’re going to feel quite bewitched by this story, trust me.

What’s with me and witch-related terms? It’s a curse. Ugh.