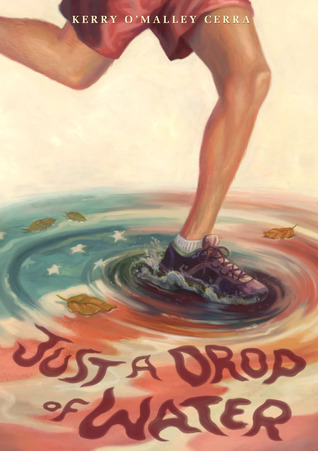 Just a Drop of Water by Kerry O’Malley Cerra

Ever since he was little, Jake Green has longed to be a soldier and a hero like his grandpa, who died serving his country. Right now, though, he just wants to outsmart—and outrun—the rival cross country team, the Palmetto Bugs. But then the tragedy of September 11 happens. It’s quickly discovered that one of the hijackers lived nearby, making Jake’s Florida town an FBI hot spot. Two days later, the tragedy becomes even more personal when Jake’s best friend, Sam Madina, is pummeled for being an Arab Muslim by their bully classmate, Bobby.

According to Jake’s personal code of conduct, anyone who beats up your best friend is due for a butt kicking, and so Jake goes after Bobby. But soon after, Sam’s father is detained by the FBI and Jake’s mom doubts the innocence of Sam’s family, forcing Jake to choose between his best friend and his parents. When Jake finds out that Sam’s been keeping secrets, too, he doesn’t know who his allies are anymore. But the final blow comes when his grandpa’s real past is revealed to Jake. Suddenly, everything he ever knew to be true feels like one big lie. In the end, he must decide: either walk away from Sam and the revenge that Bobby has planned, or become the hero he’s always aspired to be.

A gripping and intensely touching debut middle grade novel by Kerry O’Malley Cerra, Just a Drop of Water brings the events of September 11, which shook the world, into the lens of a young boy who is desperately trying to understand the ramifications of this life-altering event.

I’m so happy such a diverse, realistically-told, family and friendship-focused and touching middle grade book was written.

I won’t lie, I wasn’t attracted to this book at all at first. That cover, meh. That plot, maybe? I wasn’t even supposed to read it, but unexpected book mail is always welcome.

The moment I started it though, I knew this would be a story I wouldn’t forget. Jake is such an authentic thirteen-year-old boy who tries to make sense of the 11/09/2001 catastrophic event.

His best friend, Sam, whose family is Muslim, started being bullied after the events of the towers falling. Jake does his best to protect and defend him and his family, but as much as he wants for everything to go back to normal, he by himself cannot open the eyes of thousands of people who believe Islam and its believers are their new enemies.

But he sure as hell is going to try.

What a beautifully-written book. Cerra captured the emotions thirteen-year-olds are bound to feel when such a tragedy occurs so, so well. I’m disappointed this book hasn’t gotten more attention, because it, without a doubt, deserves it.

5 thoughts on “Review: Just a Drop of Water by Kerry O’Malley Cerra”