Dear reader, I’m so glad you’ve found yourself on this page, because I have a wonderful author and a wonderful book to present to you today! The Reader is one of my favorite 2016 releases and probably my favorite debut so far. You can read my review HERE.

The Reader (Sea of Ink and Gold #1) by Traci Chee

Sefia knows what it means to survive. After her father is brutally murdered, she flees into the wilderness with her aunt Nin, who teaches her to hunt, track, and steal. But when Nin is kidnapped, leaving Sefia completely alone, none of her survival skills can help her discover where Nin’s been taken, or if she’s even alive. The only clue to both her aunt’s disappearance and her father’s murder is the odd rectangular object her father left behind, an object she comes to realize is a book—a marvelous item unheard of in her otherwise illiterate society. With the help of this book, and the aid of a mysterious stranger with dark secrets of his own, Sefia sets out to rescue her aunt and find out what really happened the day her father was killed—and punish the people responsible. 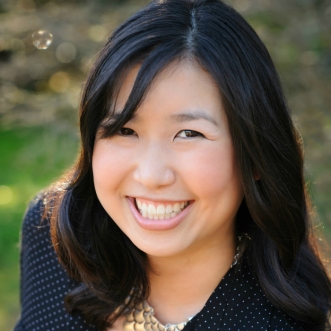 Traci Chee is an author of speculative fiction for teens. An all-around word geek, she loves book arts and art books, poetry and paper crafts, though she also dabbles at piano playing, egg painting, and hosting potluck game nights for family and friends. She studied literature and creative writing at UC Santa Cruz and earned a master of arts degree from San Francisco State University. Traci grew up in a small town with more cows than people, and now feels most at home in the mountains, scaling switchbacks and happening upon hidden highland lakes. She lives in California with her fast-fast dog. The Reader is her YA debut.

Hello, Miss Chee! Thank you for joining us today. We are extremely excited about The Reader! Please tell us a little about yourself. What three things would you bring with you if you were to get stranded on a deserted island?

Hi there! Thanks for inviting me to come chat with you.

Funny you ask this question, because in high school, after a really hilarious viewing of Jurassic Park III, my friend Carrie and I were actually inspired to make a laminated card of things to bring if we were ever stranded on an island… “with dinosaurs and/or wolves.” Let me share with you a brief selection of advice:

Wear: 2 pair thick socks, bright orange underwear (to use as a signal flag, if necessary)

Do: not fall if chased, not let phone get taken away

I still keep the card in my wallet.

Do you have a predilection for the fantasy genre, or are you also open to writingcontemporary, dystopia, historical fiction, etc.? What is it about fantasy you like most?

Any time I’ve ever tried writing something realistic, the fantastic has somehow crept in—sometimes in the form of fairy tales, sometimes in magic—and I find again and again that I’m drawn to the wondrous. I think there’s just something about the speculative genres that allows you to explore deep human truths in really exciting ways.

The story features a diverse and large set of characters. If you had the choice, would you rather be a pirate, an assassin, a reader or a warrior?

Oh, this one’s easy! I’d be a reader any day. Too much blood and gore in the other professions, haha.

Sefia and Archer very, very much need each other. But who would you say needs the other most and why?

In the beginning, Sefia is so stubbornly independent—and Archer is so lost—that I think he starts out needing her more than she needs him. But as their friendship grows, and they both help each other out of their suffering, Sefia comes to realize how much she needs to open herself back up to trust and companionship and love, and by the end I think she needs him just as much as he needs her.

The pirates are an important part of the book. What inspired their creation?

Back in college, I was working at a movie theater and I started making a list of all the films my coworkers recommended to me. Among them was Akira Kurosawa’s Seven Samurai (1954), which I loved so much I immediately went out to rent the American remake, The Magnificent Seven (1960), a wild west sort of movie about hero-cowboys, starring Yul Brynner and Steve McQueen. (It’s been remade again with Denzel Washington and Chris Pratt and I’m looking forward to it with equal parts trepidation and excitement.)

When Steve McQueen’s character introduces himself to Yul Brynner, he speaks so quickly that when he says “Chris,” I completely thought he said “Crescent.” And I thought, Chris Crescent is a cool name. I imagined him a pirate captain with the swagger of a cowboy, a kind of lone ranger of the uncharted sea, and tucked him away in the corners of my imagination. Later, when I discovered Firefly with its space cowboys, I felt emboldened. If someone could pull off space cowboys, surely I could pull off cowboy-pirates, with the wild blue ocean as their lawless frontier? I hope so, and I hope readers like Kelanna’s outlaws as much as I do!

Family and friendship are themes that never leave the story. Why are they so essential?

I think this goes back to what I said above, about fantasy as a way to explore human truths. How we form connections with people, and how those connections inform who we are, and what happens when those connections are betrayed or broken, those are all really compelling topics to me, and writing about them is one of the ways I try to understand them myself.

If The Reader ever becomes a movie, who would you see playing the roles of Sefia, Archer and Captain Reed?

A film adaptation of The Reader would be amazing! My dream would be to see some relatively unknown multiracial talent take on those characters, really inhabit them with thoughtfulness and care, and then blow the minds of everyone in the audience with their brilliance.

The romance is something that is slowly developed in The Reader and not a main focus. Will it be different in the sequel?

In The Reader, the romance ended up being secondary to the main plot for a couple reasons. One, the characters have so much other stuff to do: figure out what to do with the book, run, bargain for their lives, fight off enemies. Two, they’re both so broken—one has lost everyone she’s ever loved, the other’s lost even his memories and his name—that they spend much of the story learning how to be whole again.

But in the end, things change—for both of them—in a big way. I’m excited about what this means for the sequel and the complications it creates in their affection for each other. One thing is for sure, wherever the romance goes in Book 2, it’ll remain rooted in who they are as people—complex and flawed and beautiful.

The Reader in three words?

Thank you so much, Miss Chee!

I loved all these questions—they were so insightful and so particular to the story! Thanks for having me!

I think this is one of my favorite interviews to date. Miss Chee is such an interesting person. I loved reading her answers and hopefully you did, too.