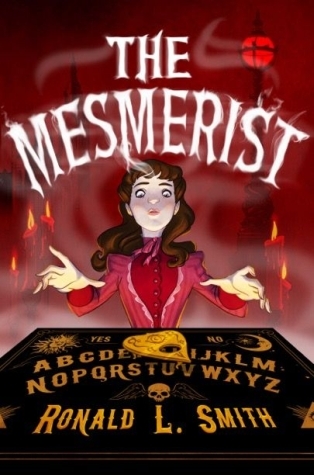 The Mesmerist by Ronald L. Smith

Thirteen-year-old Jessamine Grace and her mother make a living as sham spiritualists—until they discover that Jess is a mesmerist and that she really can talk to the dead. Soon she is plunged into the dark world of Victorian London’s supernatural underbelly and learns that the city is under attack by ghouls, monsters, and spirit summoners. Can Jess fight these powerful forces? And will the group of strange children with mysterious powers she befriends be able to help? As shy, proper Jess transforms into a brave warrior, she uncovers terrifying truths about the hidden battle between good and evil, about her family, and about herself.

I probably shouldn’t give this book such a *high* rating. After all, it’s exaggeratingly inspired of the Shadowhunter World. But since it’s a middle grade novel with a very different writing style, atmosphere and set of characters, I didn’t mind it all that much. Plus it’s not a copy cat – it’s more like the outline of the plot resembles Clare’s series, but not entirely.

I had so much fun with this book. It’s mysterious, elegantly-written and possesses a heroine quite mature for her age – thirteen. I guess this would classify the book as a ‘tween’ read, but it still very much has that youngish vibe I usually link to middle grade novels. It’s fast-paced, action-filled and stars a diversely supernatural cast that will keep you entertained.

It’s too bad there were one too many deaths in it, because the character in question really didn’t deserve that to happen to them. I thought it was a joke at first. But the heroine is well surrounded nonetheless, so I tried to shake it off as best as I could. Actually, I normally have no problem with seeing characters leave for the otherworld before their time, but in this case the death in question irked me a little, because it seemed to not feed the plot enough, so why even bother to kill them?

I really wonder if there will be some kind of sequel to this. The ending is conclusive, but it leaves me wondering what will happen to the characters. What are they to do now? Well, part of me assumes, but the other part wants to know for sure how their lives will turn out after all that has happened. Plus the world-building really needs more building so maybe with a sequel it will expand somehow? And I didn’t totally get the whole faerie thing.

I know I’ve enumerated more negative points than positive, which I really shouldn’t have, because I did really enjoy this. Jess is stupendously strong and mature and determined. I enjoyed her adventures and friendships and seeing her kick asses.

4 thoughts on “Review: The Mesmerist by Ronald L. Smith”