See my review for this book here.

Tell us a little about yourself… Are you a fan of horror movies? What makes your day? Is being an author the only profession you’ve ever practiced?

I am a fan of certain kinds of horror movies. I’m not a huge fan of modern slasher films but I do love monster movies and anything suspenseful and atmospheric.

As an example, three of my favourite movies of all time are JAWS, ALIEN,

and THE THING. All three movies have very strong atmospheres that shape the tension of the films. I also love Alfred Hitchcock, especially REAR WINDOW.

A good writing day definitely makes my day. By that I mean the writing is flowing smoothly and it doesn’t take me all afternoon to write one paragraph (it feels like it does sometimes).

I’ve done lots of things besides write, including teaching writing, working for an insurance company and selling books. I always wanted to be a writer, though, ever since I was 12 years old. 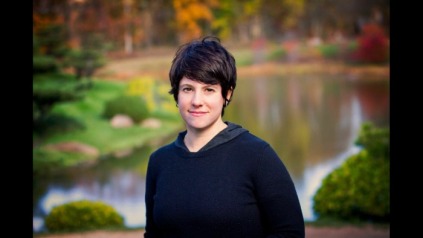 What made you want to write a dark retelling? And why Alice’s Adventures in Wonderland in particular?

When I was thinking about ALICE I didn’t intend for it to be so dark. I had wanted to write an Alice-inspired story, and I was thinking it might be sort of science fiction/steampunk-ish. When I started writing something else happened – the story took a major left turn on me into this dangerous place- and I just went with it.

Which character from the story would you say was the easiest to write and which the hardest?

Cheshire was the easiest to write. I saw him and the scene in which Alice and Hatcher first meet him very clearly.

Hatcher, in some ways, was the hardest and the easiest. I understood his madness very well but it was sometimes a challenge to communicate that in a way that wasn’t stereotypical.

Is there a scene in particular that is your absolute favourite because you had fun writing it or for any other reason?

The Butterflies scene, when Alice and Hatcher meet the Caterpillar, was not precisely a favorite because the subject matter was tough but it was one of the easiest scenes for me to write. I envisioned that scene pretty early on in the writing process and I was always writing toward that point in the book.

Alice and Hatcher make a very badass, ass-kicking team. Would you say that without one another, they would not survive? Do they depend on one another?

They absolutely would not survive without one another. Alice needs Hatcher because he physically protects her from the world, especially at first when she is still drugged from the asylum. But Hatcher needs Alice because his love for her tethers him to the world. Without her he would drift away into madness and never return.

For what reason did you decide to turn the creatures of Wonderland you used in this retelling into human form?

I think the scariest monsters are the ones with human faces, the ones that we think are safe but are decidedly not.

Can you tell us something about the sequel that we do not already know?

The structure of RED QUEEN has a lot more in common with a fairy tale than with THROUGH THE LOOKING GLASS. I deviate from the original novel a lot more. I wanted to explore the idea of stories and what they mean, and so there are quite a few stories-within-stories in this book.

Thank you so much, Miss Henry!

Thanks for having me!