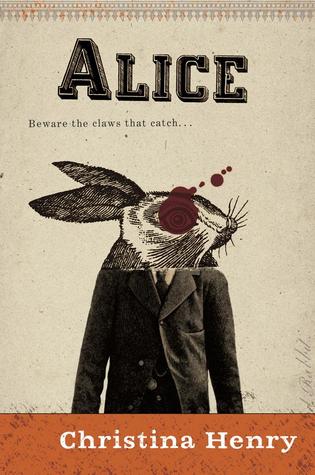 In a warren of crumbling buildings and desperate people called the Old City, there stands a hospital with cinderblock walls which echo the screams of the poor souls inside.

In the hospital, there is a woman. Her hair, once blond, hangs in tangles down her back. She doesn’t remember why she’s in such a terrible place. Just a tea party long ago, and long ears, and blood…

Then, one night, a fire at the hospital gives the woman a chance to escape, tumbling out of the hole that imprisoned her, leaving her free to uncover the truth about what happened to her all those years ago.

Only something else has escaped with her. Something dark. Something powerful.

And to find the truth, she will have to track this beast to the very heart of the Old City, where the rabbit waits for his Alice.

to one of the creepiest retellings ever written.

I didn’t think it was ‘‘gross’’ or anything of the like, but it is really, unmistakably disturbing. And that’s fun. Witnessing the new somber Alice kill a bunch of murderers completely captured my attention. Crazy thing is she still keeps a sliver of innocence through all of that. Maybe because, compared to her friend THE Hatcher, she’s a sweetheart. But she really made me think of a fallen angel ready for vengeance and who would stop at nothing to get what they want. Eheheh.

I recall the author did not put much emphasis on the appearance of Hatcher, or Alice, for a matter of fact (not that we need it), so I basically imagined my own sexy Hatcher. He’s ten years older than Alice, and that’s a downer, in my opinion. I reckon he is in his forties and very much feels his age. His being serious all the time seriously never helps in making him sound younger. Plus I don’t remember him ever cracking a joke. Ever. He’s all about intense glares, deep speeches and… killing people, of course.

Christina Henry’s writing style is one that will one day make her an international best selling author. She might not know it yet, but I have a strong feeling that will happen if she keeps writing books as good as this one! I am a very hard grader on what I believe MAKES a story – the characters. But Miss Henry passed the exam, with a beautiful mark, shall I add. As you know, this is a retelling of Alice’s Adventures in Wonderland (a book I was never a fan of). So the majority of the protagonists and antagonists we see are from Wonderland. Except, funny thing is the author decided to transform the animals we see in the classic into humans! So the Cheshire cat is… not really a cat. None fully keep their former personalities, seeing that they are considerably mischievous in here, if not completely mad and devious, but you’ll still recognize them in their gestures and voices.

Something I thought was undeniably ridiculous was how easily Alice kills her targets. It’s not that she’s skilled or anything, although she does show a promising career in assassination, but she’s just so weirdly lucky. She means to kill someone, and because she ‘‘takes them by surprise’’ they’re dead before they can even flinch. Or she stabs them in the back before they even hear the flicker of a movement behind them. They never put up a fight. A tiny bit unrealistic, if you ask me.

How is it that I always end up my reviews on a negative paragraph? I promise to start with the flaws and end with the wonders next time. This book is worth it. And you DON’T even have to like Alice’s Adventures in Wonderland to enjoy it. But you do need to manage darkness in your stories. Also, it may not be such a good idea to read it before going to bed, just sayin’.