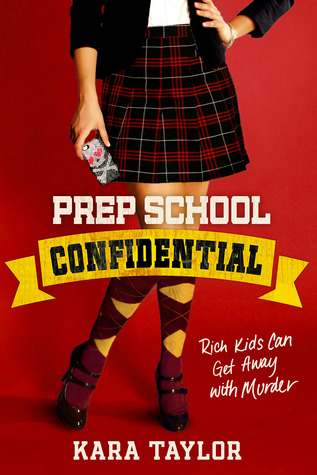 In this breathtaking debut that reads like Gossip Girl crossed with Twin Peaks, a Queen Bee at a blue-blooded New England prep school stumbles into a murder mystery.

Anne Dowling practically runs her exclusive academy on New York’s Upper East Side—that is, until she accidentally burns part of it down and gets sent to a prestigious boarding school outside of Boston. Determined to make it back to New York, Anne couldn’t care less about making friends at the preppy Wheatley School. That is, until her roommate Isabella’s body is found in the woods behind the school.

When everyone else is oddly silent, Anne becomes determined to uncover the truth no matter how many rules she has to break to do it. With the help of Isabella’s twin brother Anthony, and a cute classmate named Brent, Anne discovers that Isabella wasn’t quite the innocent nerdy girl she pretended to be. But someone will do anything to stop Anne’s snooping in this fast-paced, unputdownable read—even if it means framing her for Isabella’s murder.

Guess what. This book should be made into a movie.

Or a TV show. That would be great, too.

It is impossible not to have fun with this book. Anne is spunky, and courageous, and rebellious. Plus let’s not forget that the mystery/murder case she is trying to solve takes place at a boarding school she is newly attending, after having started a fire at her previous school. Oh yeah.

I should say that it is hilarious how many suspects there are in the case of her roommate’s murder. I mean, according to Anne, 1/3 of the school is a suspect. But, you know what? I didn’t even blink at that. I just thoroughly enjoyed watching her speculating and trying to solve a puzzle of 100 000 pieces. What can I say; her motivation is one of her charms.

Also great are all of her fellow classmates, newly made friends… and enemies. Surprisingly, even the teachers have their role to play. The author didn’t just cast them aside or used them as props. They honestly are needed and add to the whole case… and to the story’s atmosphere. Mostly by being secretive and severe, but o h w e l l that’s how I liked them anyway.

So the love triangle may piss you off, and I’d completely understand, because clearly 1) it doesn’t help us in understanding Anne better, 2) one of the two guys we know she will never see at the end of the story and 3) it has a poor conclusion. I am not even sure it came to an end… that she actually made her choice. It’s hazy, but maybe we will get further detail in the sequel.

Before I admit to being disappointed by the revelation, you need to know that the entire process to solving the murder mystery is incredibly entertaining… but the truth will not take your breath away. At least, it certainly did not take mine, because let’s just say I’ve seen, much, much, much, a thousand times better on How to Get Away with Murder and Scandal.

Nonetheless, go have some fun. READ THIS.