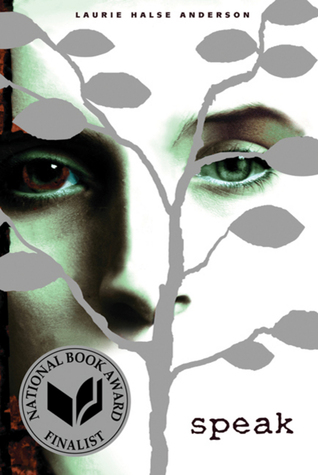 Melinda Sordino busted an end-of-summer party by calling the cops. Now her old friends won’t talk to her, and people she doesn’t even know hate her from a distance. The safest place to be is alone, inside her own head. But even that’s not safe. Because there’s something she’s trying not to think about, something about the night of the party that, if she let it in, would blow her carefully constructed disguise to smithereens. And then she would have to speak the truth. This extraordinary first novel has captured the imaginations of teenagers and adults across the country.

Well, I can’t help but feel a little disappointed. I mean, the summary doesn’t reveal much (kind of like Melinda herself) and so, obviously, I made my own assumptions of the plot. Turns out, there’s no killing involved. It’s not a mystery or a thriller; it’s a psychological story. If I had known before, I think I might have enjoyed this a tiny bit more.

So, Melinda. She’s confused, scared—terrified—and convinced that she’s alone in this wide, animalistic world. Things are somewhat bearable, but that is prior to her losing her only friend at school and seeing IT. We witness her trying her best to shut down everything around her and take nest in her own mind. It’s not pretty to see and it does make for tragic moments, but they’re all part of the process she creates to survive high school.

I really think that the outline of the book is fairly original. It’s feels like it’s written in journal entries, which gives such an authentic atmosphere to the story. It makes us believe in Melinda and hope that everything turns out for the best for her. The writing makes the story flow in a perfect rhythm for this type of story… lent, that’s for sure, but deep and reflective.

A couple of things that could have been better: the secondary characters, Melinda’s parents and the tragedy around IT itself. Basically, this is a Melinda’s world: we’re in her head… and since she’s not the most popular girl in school, there aren’t many interactions between her and other kids. This equals scarcely any secondary characters. There’s David, the headstrong and could-not-be-more-different-than-Melinda David. But what about him? We only get to know him a little through short ‘‘journal entries’’ of Melinda’s.

Melinda’s parents are puzzling… At least, to me. For most of the book, they’re extremely mad and annoyed at her, especially the mother. She never tries to actually ask Melinda what’s wrong. No wonder Melinda can’t muster the force to do so. But then, at end of the story, we see the dad showing such benevolence and I’m there squinting my eyes, like why is this the first time we see this facet of his personality? Surely because Melinda prefers limiting her interactions with her parents.

And the last thing that let me down is the details around IT. Or, shall I say, the lack of them. We don’t know his past, why he does what he does or, even, what will happen to him. Alright, so the last part is easy to imagine, BUT STILL. The ending is very open, so that’s something to remember. I find it sad that we don’t get any kind of info on IT… I wish we knew what his life at home looks like, just so we can understand his motives for doing what he does better.

This book didn’t take me by surprise, as I have read a panoply of novels with similar (if not exact same) themes. But I can guess that, when it was first published, there were reasons to fuss about it. I am still recommending it, seeing that it’s so profound and realistic and I grew quite attached to Melinda. Hopefully, you will as well.