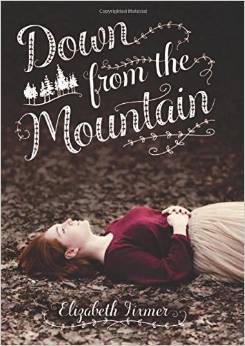 Down from the Mountain by Elizabeth Fixmer

Eva just wants to be a good disciple of the Righteous Path. She grew up knowing that she and her mother are among the chosen few to be saved from Armageddon. Lately, though, being saved feels awfully treacherous. Ever since they moved to the compound in Colorado, their food supplies have dwindled even while their leader, Ezekial, has stockpiled weapons. The only money comes from the jewelry Eva makes and sells down in Boulder–a purpose she’ll serve until she becomes one of Ezekial’s wives.

But a college student named Trevor and the other “heathens” she meets on her trips beyond the compound are different from what she’s been led to believe. Now Eva doesn’t know which is more dangerous–the outside world or Brother Ezekial’s plans.

If someone had summarized this story for me, out loud, and had tried to convince me that this is something I don’t want to miss out, I would not have believed them. Because it never sounded like my type of book. And even now, after having turned and rigorously read all of its pages, I’m still irked by a couple of things – including one or two characters. But, overall, really, it surprised me.

Well, surely, you need to know that there’s no romance. You think that there might be a little of it… you speculate… until you realize that it doesn’t go there and it just won’t, however much you’d like it too. The story doesn’t focus on that, and it’s fine for some, but I personally need romance in my reads. There are some exceptions, if I somewhat realize that said romance might happen in the sequels, but this is a standalone so I reckon that what I got is all there is to get.

Too bad. I still don’t know what happened with Jacob, as in, why the sudden change of heart? I think that part lacked solid information. The sketchy explanation the author offered 1) was hard to believe and 2) didn’t make any sense. You can’t change your feelings toward someone in such a short period of time. You just can’t. Period.

That aside, let’s talk about the heroine now! Eva, Eva, Eva… I don’t see how anyone could ever find something horrid to say about her. She’s a good person. You can bet that I wasn’t happy about nor approving anything that ‘‘Prophet’’ Ezekial convinced her about… complete brainwash. And her doing and believing those things was the worst of all, but I was glad to see openness to the unknown and uncertain in her eyes because, let’s face it, if she hadn’t possessed that quality, this story wouldn’t have seen the light of day.

This is not a ‘‘preachy’’ story. It obviously does broach the subject of cultism, religion, faith and belief, but not in an aggressive or annoying way. Alright, so the lie detector biped just now. Of course some things will annoy you. You will be horrified and shocked and frustrated and annoyed! In all honesty, there are a hundred of times when I wanted to kill Ezekial in the story. Sometimes I wanted to shake Eva, too, but I had to understand where she came from, otherwise, what would have been the point? I couldn’t just picture the right world for her, and hope to see her hop in the next train to get there. I couldn’t do that, because I had to understand her and go through the whole process of discovering the ‘‘real’’ life one step at a time alongside her.

You will be happy to hear that everything, every scene, every sentence is fast-paced! It’s a quick and easy read. And what’s fantastic about it is that we’re not only meant to focus on one single character (the main one) but on a ton of other secondary ones, too. Plus, since it’s told Eva’s point of view, it only shows how much she cares for people and is always aware of stuff that happen around her. So many faces you’ll get attached to: Trevor, Rachel, Eva’s mom and dad, Annie… A beautiful cast that take part in an emotionally challenging story.

Maybe because, like I said, there are a lot of different characters, or maybe because the author didn’t feel it too important, but the ending doesn’t give us much on the faith of the characters after everything that happens… and if we’re given something then it’s enough unclarity to form a mist. But let’s forget about that; I did love how things turned out for Eva and that’s what counts in the end.

I never read a book like this one before, as cheesy as this may sound. I enjoyed it.

9 thoughts on “Review: Down from the Mountain by Elizabeth Fixmer”