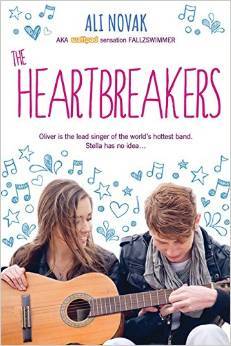 But how can Stella even think about being with Oliver—dating and laughing and pulling pranks with the band—when her sister could be dying of cancer?

I had my doubts regarding this book. Mundane teenage girl meets rock star (though I’m leaning more toward ‘‘popstar’’) and, from that exact moment, her entire life changes… talk about serendipity. Not-so-realistic serendipity.

I hate to say this, but it was insta-love between those two. I’m not a fan of insta-love.

So how did this book manage to kindle my interest so much, then?

Two words: family and friendship. Those themes were fully present.

Stella’s sister is deeply sick; she has cancer. And it’s bad. So Stella’s can’t bring herself to leave her and go to college – in another city. But guess what? Cara is a die-hard fan of The Heartbreakers, a group Stella despises, the group Oliver Perry is in.

I didn’t think it was a good idea for Stella to defer her attending college, but the fact that she did it so she can spend time with her sister was truly beautiful. I don’t think many would do as much, even for a family member; we’re a pretty self-centered generation. Or is it my spontaneous cynicism that is speaking right this moment?

But that wasn’t the only thing that enchanted me. I loved the interactions between The Heartbreakers group members and Stella. They were having fun! And we cannot deny that a celebrity can make your dreams come true… or be a life-size dream altogether *wink* *wink*. Everything was so light and completely enjoyable. Even Cara’s illness didn’t make her a moody, brooding day and night character; she was full of life, even more than Stella, and it was always a pleasure to have her around.

Don’t go thinking that the romance escaladed at 100 km/h. It was a rollercoaster… When you’re a celebrity, you have to be careful not to expose your personal life or the people you love, and for that, it was hard for Stella and Oliver to be together… among other things.

A lovely story to lighten up your mood, whatever mood you’re in.