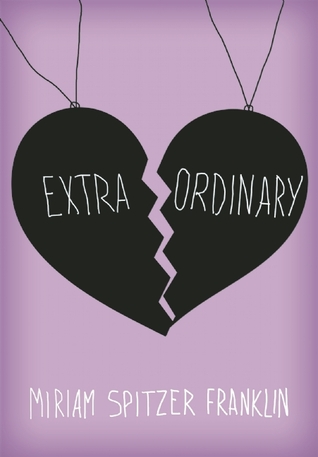 Last spring, Pansy chickened out on going to spring break camp, even though she’d promised her best friend, Anna, she’d go. It was just like when they went to get their hair cut for Locks of Love; only one of them walked out with a new hairstyle, and it wasn’t Pansy. But Pansy never got the chance to make it up to Anna. While at camp, Anna contracted meningitis and a dangerously high fever, and she hasn’t been the same since. Now all Pansy wants is her best friend back—not the silent girl in the wheelchair who has to go to a special school and who can’t do all the things Pansy used to chicken out of doing. So when Pansy discovers that Anna is getting a surgery that might cure her, Pansy realizes this is her chance—she’ll become the friend she always should have been. She’ll become the best friend Anna’s ever had—even if it means taking risks, trying new things (like those scary roller skates), and running herself ragged in the process.

Pansy’s chasing extraordinary, hoping she reaches it in time for her friend’s triumphant return. But what lies at the end of Pansy’s journey might not be exactly what she had expected—or wanted.

Extraordinary is a heartfelt, occasionally funny, coming-of-age middle grade novel by debut author Miriam Spitzer Franklin. It’s sure to appeal to fans of Cynthia Lord’s Rules and will inspire young friends to cherish the times they spend together. Every day should be lived like it’s extraordinary.

I will deny it not: my last middle grade reads had been awful ‘‘ditch away’’ ones. I mean, they all start pretty well (don’t they?), but rare are books aimed for a young audience that keep my interest from dwindling.

Extraordinary was the perfect read to lift me up of my sudden book slump. I didn’t even know it was there before I realized how I kept starting book after book without finishing any one of them. But this story was so charming and filled with beautiful themes that – even with the subject of sickness incorporated – it was a real pleasure to spend my afternoons turning its pages.

Pansy’s goal consisting in her changing into a better person to make her ill best friend, Anna, proud was lovely to see. There were moments that made me sad… especially when Pansy had remembrances of happy moments between her and Anna, but they were there, mostly, so we could see what a great bond they shared!

What would have made this book better is a share of chapters between Pansy and Andy. After all, he was Anna’s brother and a character almost as important as Pansy, in my opinion. That would definitely have made things clearer too since it was obvious that Andy had a lot of things to deal with, reflect on inside… It could have been interesting to have some of HIS memories with his sister as well.

I would have liked less repetition concerning the settings, too. Pansy’s teacher, for sure, sounded original and actually kind of amazing (she was young-ish, energetic and had all of these fun ideas of activities), but even her classroom eventually got mundane.

Recommended story for all fans of realistic/contemporary middle grade books with highly developed friendships out there!