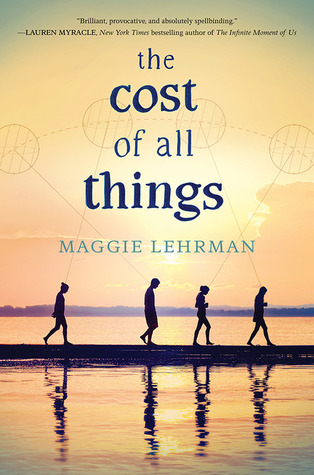 The Cost of All Things by Maggie Lehrman

Eternal Sunshine of the Spotless Mind meets We Were Liars in this thought-provoking and brilliantly written debut that is part love story, part mystery, part high-stakes drama.

What would you pay to cure your heartbreak? Banish your sadness? Transform your looks? The right spell can fix anything…. When Ari’s boyfriend Win dies, she gets a spell to erase all memory of him. But spells come at a cost, and this one sets off a chain of events that reveal the hidden—and sometimes dangerous—connections between Ari, her friends, and the boyfriend she can no longer remember.

Told from four different points of view, this original and affecting novel weaves past and present in a suspenseful narrative that unveils the truth behind a terrible tragedy.

My body didn’t feel like one muscle anymore, and it didn’t feel like twenty muscles. It felt like thousands. The parts of me that weren’t working weren’t out of practice—they were out of my control completely.

Ari got her first spell from a hekamist when she was just a kid and her parents had died in a fire accident. It is highly discouraged to take two permanent spells… because the side effects exponentially increase. But Ari doesn’t have a choice – or so she thinks – for the only reason that remembering her boyfriend after his death crushes her heart to an unbearable point. So Ari takes a second spell from a hemakist.

And from that moment on she will never be able to do what she loves most in life again. Dance.

This was my third magical realism novel read, the first two being The Strange and Beautiful Sorrows of Ava Lavender and Magonia, and, having enjoyed each one of them – some more than others –, I am now convinced that this is a genre I should explore more frequently. I wasn’t familiar with the term ‘‘magical realism’’ nor knew what it meant before joining Goodreads, to be honest, so that is another reason to thank this web site for existing.

This story follows four different characters – Ari, Markos, Diana, Kay (+ an additional fifth: Echo) – and, by entering their thoughts completely, we discover that those human beings have more dept, consideration and understanding than they let show to the outer world. That’s what I liked about them so much. For instance:

1) Ari looks extremely vulnerable and reckless but we soon discover that things haven’t been easy on her and come to understand her choice of buying another spell for herself.

2) Markos… seems, at first, like the stereotyped player but his knowing of this fact about himself made me look at him in another way. I’ve never read about a character that knew his flaws as well as this guy does. And he tries to do better. Always. He is definitely worth your attention.

There’s a lot of character growth going on in this, especially regarding Kay’s character. If she might be annoying you at first, that case will probably not still apply at the end of The Cost of All Things.

The element I disliked most however was the denouement. It wasn’t the ending I expected and… it simultaneously felt rushed and too slow. Rushed because we had four points of views in the novel: it was hard to get a detailed implicit/explicit epilogue for every character in the last chapters and too slow because the scene in question was quite long.

This is a story that will take the reader to a place similar to a contemporary alternative world, a place where magic is real, illegal, comes with a monetary price and is filled with dangerous collateral damages. The Cost of All Things will make you ask yourself… What would I do if I were Ari, Markos, Diana and Kay? Would I resort to magic as well? Was it all worth the consequences?

8 thoughts on “Review: The Cost of All Things by Maggie Lehrman”