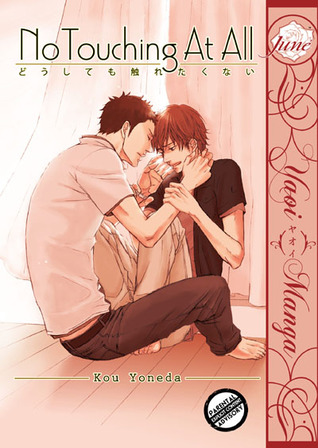 No Touching At All by Kou Yoneda

On his very first day at a brand-new job, shy Shima is trapped in the elevator with a hungover mess of a guy…who turns out to be his boss! Togawa’s prickly exterior definitely puts the rookie recruit on-edge, but it doesn’t take long before Shima’s every waking thought is invaded by his overbearing yet totally thoughtful superior. Will Shima put aside a history of disappointment in order to take a chance on a complicated relationship?

My heart… it is so fragile right now. If you’re expecting an easy, light, maybe even a fluffy romance contemporary story, you might want to think again because… this was pretty sad and emotional, although cute throughout.

For instance, for half of the manga, one of the main characters (Shima) cried. And cried. And cried. Having started a new job, he wanted to get away from his angsty past, but the last thing he hoped for is falling for a ‘‘straight’’ man again. But he did. Shima and Togawa were adorable together but, for this later, the relationship was established more on a sexual activity basis than one involving feelings. At first. But Togawa’s dream was to be a father… something he could not have while being with Shima. And Shima knew it.

I must say that the atmosphere was a little overwhelming here and there. I didn’t even like Togawa for the most part. He was quite a tender man, but he (even though unintentionally) made Shima feel more sadness than happiness, it seemed. He had a lot on his mind though, that’s for sure. They both had pasts they wished they could forget or at least learn to live with and not let the latter keep them from going forward. It could have been lighter but the author wrote a beautiful and profound story about two different men falling in love against their own will… but not being able to live without one another.

I guess the fact that the story had such an effect on me is what was most exceptional about this manga. The story might not have been the most original of all, but there was an authenticity that I think plenty of other manga lack. Some ‘‘Slice of Life’’ manga show a very far-stretched storyline that steps on the imaginative side more than necessary. But this was believable. And the characters could be related to or at least empathized with – something I did. Shima had this ‘‘innocence’’ in his personality and shyness and, every time he cried, it felt like a someone was hammering my heart. Bang, bang, bang.

7 thoughts on “Review: No Touching At All by Kou Yoneda”