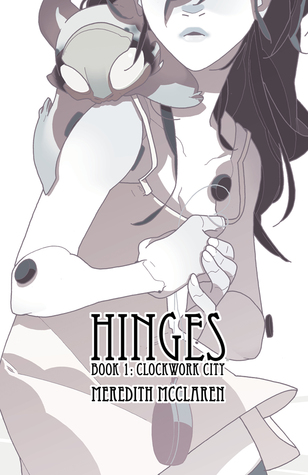 HINGES is a fantasy webcomic, turned graphic novel, about a doll named Orio and her troubling companion Bauble. New to the city of Cobble, Orio must depend on help where ever she can find it, but her assigned familiar Bauble has other interests. And as the two explore the walls of their city, they find that they are not the only new arrivals. In a place that runs like clockwork, it only takes a little disruption to upend a city.

Well… this was a peculiar steam punk story.

I try to avoid web comics, because the art style doesn’t always appeal to me but, since this was turned into a graphic novel, I wanted to give it a try.

This is the story of a girl named Orio who finds an usual Odd (clockwork pet). She wants to become a mender and repair animals, I assume, but the position isn’t granted to her. In truth, the story is, like I said… strange. There are so many unanswered questions and I could see that the world-building has potential, except it wasn’t much exploited. For the majority of the galley, I did understand what was going on, but the hostility of the pet, Bauble, wasn’t justified. At all.

I would say that the story lacked clarity because of the rarity of the dialogs. It was an image-driven graphic, with little conversation between characters here and there, emphasise on the word ‘‘little.’’

Still, it was lovely enough and, while I didn’t understand everything and found myself taking time to get used to the art, I appreciated the characters and the originality of it all. Plus, the Clockwork City really is interesting… but there needs to be more of it for us to see.

Also, the story needs a male character, because there weren’t any and I think it could make the storyline even more interesting. And maybe add a bit of romance. That would be wonderful.

I think Hinges is worth giving a shot, if you’re into web comics or enjoy graphic novels in general, illustrated steam punk stories.