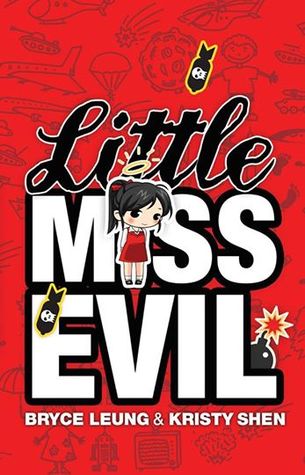 When you live in a volcano, ride to school in a helicopter, and regularly see your dad on the news with the caption “EVIL GENIUS” underneath his picture, it takes a lot to rattle you.

Until you get a message that says: We have your father. Deliver the NOVA in 24 hours or we will kill him.

What’s a NOVA you ask? It’s a nuclear bomb capable of turning the city into a radioactive mushroom cloud, and ever since Fiona’s dad built it, it’s caused nothing but grief. But telling him to stop building weapons is like telling Michelangelo to stop painting.
And that’s why thirteen-year-old Fiona has a flamethrower strapped to her arm. After all, who’d mess with a girl who can throw fireballs?

Well this was fun! A quick middle grade read full of action and humour.

I’ve never read a story relating the life of a thirteen-year-old teenage girl being the daughter of a super-villain. I’ve DNF’d one with a guy being the son of a serial killer though, but it wasn’t half as entertaining as this one.

Fiona was the perfect character to narrate this story: She was human enough to understand how wrong it was of his father to do such villainous things and she even wanted to be a doctor. It doesn’t change that she had expertise in the doing of shenanigans. But she was also sweet! and witty! and considerate!

The only thing is that Little Miss Evil was too simple of a story. It could certainly have been more complex, giving the originality of the concept. So much could have been done. It’s a bummer the story ended up being so short – 144 pages long.

Also, there were plenty of secondary characters, but not one was developed enough for him/her to become endearing to us. Admittedly, most of them were malefactors but, still, it is not as if Fiona was an angel, and I thought her to be quite charming.

Perfect for readers between the age of 8 and 12!

Just a short excerpt to show you the kind of humour it contained:

‘‘What did you think of your present?’’
‘‘Why did you decide to make me a flamethrower?’’
‘‘Well, Fiona,’’ Dad says, putting a hand on my shoulder, ‘‘I think there’s an age in every young girl’s life where they need to be able to incinerate whatever they want, wherever they want, whenever they want.’’