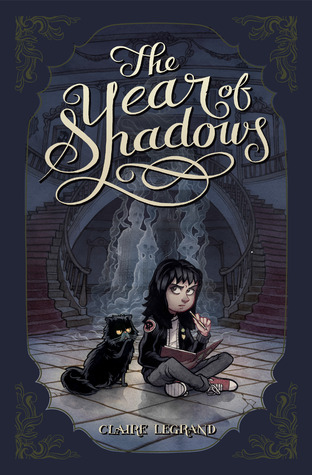 The Year of Shadows by Claire Legrand

Olivia wants a new life, and it might take ghosts to get it. A heartfelt, gently Gothic novel from Claire Legrand.

Olivia Stellatella is having a rough year.

Her mother’s left; her neglectful father, the maestro of a failing orchestra, has moved her and her grandmother into the city’s dark, broken-down concert hall to save money, and her only friend is Igor, an ornery stray cat.

Just when she thinks life couldn’t get any weirder, she meets four ghosts who haunt the hall. They need Olivia’s help; if the hall is torn down, they’ll be stuck as ghosts forever, never able to move on.

Olivia has to do the impossible for her shadowy new friends: save the concert hall. But helping the dead has powerful consequences for the living; and soon it’s not just the concert hall that needs saving.

What would the world of Death look like?
1) a long, winding, icy river full of drifting souls
2) stars forever and ever, in all directions
3) heaven (clouds, angels, golden gates)
4) hell (fire, brimstone, demons)
5) nothing

Admittedly, middle grade is not my to-go genre. But, when in the mood, I can myself having such a great time with those reads. I remember when I was reading The Storybook of Legends and The School for Good and Evil (which are both MG books) and finding them so interesting and enjoyable, especially the former, that I did not want them to end. This book though, it was…boring for very few surprises were present. And, the mood was there. It is the story that did not catch my attention nor deliver. Plus, I am well aware that it was aimed for a younger audience and that it is paranormal, but I still must say that there were so many implausible scenes in the story.

The plot was very poor in mystery and gothic ambience even though, yes, it is a gothic novel. And, horror? Not at all. Suspense? I wish. Maybe it is me that has become too *old*, but I truly felt like this was the sort of book that had much potential and the author started to exploit it but then finished off the other half of the novel hurriedly. Because the beginning was intriguing and atmospheric. Two elements that, at around 40% of the book, disappeared. Olivia’s mom left her and, since then, she hasn’t been able to stop blaming her father, the Maestro, for it. Now things got worse; her grandmother, father and herself moved inside an old and shabby place. Her mood worsened day after day, until she found herself on a mission: help the four ghosts haunting the orchestra. To do so, she needs to let them possess her, until they remember the way they died, find their anchor and finally move on. Except, she is not alone on this; Henry will barely leave her side and will encourage her the way a true friend knows how.

First, the whole *possessing* thing, it was not well-explained. I understood the fact that it is in the ghosts’ memories that they entered, but it felt too much like they were traveling back in time. I am saying this because, strangely, Olivia and a ghost entering her body could move as they wished. In the memory. They may not have been able to change its outcome but there were NEW interactions and I did not comprehend why they – Olivia and the ghost itself – could not only, in some way, witness the day of death while being exterior characters alone. I mostly shrugged it off, but it is nonetheless something that I wish were explained in more detail.

I thought I could like Olivia, and I relatively did. At the beginning and end of the story. She was negative for most of the book and quite unpleasant with everyone, except her grandmother. She had a character development of course and thank god she stopped being disagreeable with Henry, but her bad temper ignited every time the Maestro – her father – was around. She was mean to him. I mean, at first, I could understand why it is she was acting that way, but she never stopped. And the maestro let her talk and insult him without saying anything.

If at twelve years old I had said something like this to one of my parents, I cannot even imagine what a scene would have followed. Plus, I would probably have been grounded for a forever amount of time. But Olivia did not have this problem; she allowed herself to say similar hurtful things over and over and it frustrated me. The part of me that understood Olivia faded away after some time.

There was some good characterization in this, especially regarding the supporting characters and the writing was simplistic but lovely still. Other than that, I really found this to be just ‘‘okay’’ and will think twice before starting another middle grade book by this author. I am pretty curious about her YA Winterspell book though. Who knows, maybe that one will be an excellent read.

16 thoughts on “Review: The Year of Shadows by Claire Legrand”