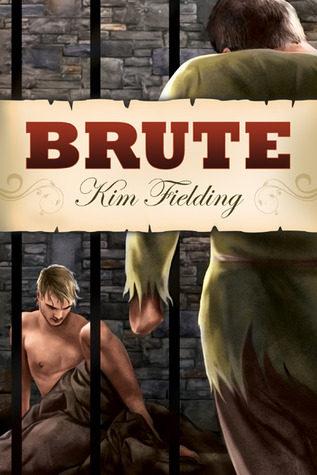 Brute leads a lonely life in a world where magic is commonplace. He is seven and a half feet of ugly, and of disreputable descent. No one, including Brute, expects him to be more than a laborer. But heroes come in all shapes and sizes, and when he is maimed while rescuing a prince, Brute’s life changes abruptly. He is summoned to serve at the palace in Tellomer as a guard for a single prisoner. It sounds easy but turns out to be the challenge of his life.

Rumors say the prisoner, Gray Leynham, is a witch and a traitor. What is certain is that he has spent years in misery: blind, chained, and rendered nearly mute by an extreme stutter. And he dreams of people’s deaths—dreams that come true.

As Brute becomes accustomed to palace life and gets to know Gray, he discovers his own worth, first as a friend and a man and then as a lover. But Brute also learns heroes sometimes face difficult choices and that doing what is right can bring danger of its own.

“Y-you’re a giant because an ordinary man’s body is t-too small for what you are.”

And the award for the sweetest main character goes to…BRUTE! (Ironic, isn’t it?) Indeed. Brute is an amazing and selfless person. Always there to help, without being asked to and not claiming any reward afterwards. Yet, he saved the life of a prince and had been given a post at the palace, as the guard…of a traitor. One every person fears and can’t stand to be close to. Brute, kind and wonderful Brute, is mystified by Gray. He wants to know him. Every part of him. And why he’s been put in this prison! What is it he has done to deserve such a fate?

‘‘Don’t you dare say that!’’ Her green eyes flashed. ‘‘Don’t you dare! You are a good man, Brute, and a kind one. You’re patient with Warin and you’re working hard to better yourself and you…you save people! All those other things, they don’t matter, not to anyone with sense.’’

Woah, I loved the supportive cast. Gosh, they were so many beautifully developed and uniquely portrayed ones! Alys, who you’ve just heard lecturing Brute, was a voice to be heard in the story. And her brother, Warin, so hard to resist! I mean, could you imagine: a *giant-like* man befriending a charming little boy. How endearing is that? Very! Sweetly done, author! Also, I quite liked Lord Maudit. You know, by his name (‘maudit’ is translated as ‘cursed’ in French), I thought he was going to be a darker character to read about so, for that, I must admit that I was disappointed. Really, he was interesting, but I kept expecting to ‘love to hate him.’ But I didn’t. He turned out to be a fair enough man…even though inexplicably pushy and blunt in his interrogations from time to time.

Before he felt a single drop, he heard the rain coming; it was like a thousand footsteps running down the cobbles. And then it was upon him all at once, and he was instantly soaked. Between the dark and the downpour, he could barely see where he was going. His feet splashed through the puddles that appeared out of nowhere. If his mind hadn’t been stormier than the weather, he would have worried for his boots.

The writing was quite good! I was actually impressed. It made the story very easy to follow and, even though it was narrated in a 3rd person point of view, I felt immensely connected to the main character and the secondary ones too. Perhaps because there was great characterization. However, I did think the plot to be slow and possessing some holes here and there. Actually, the story started out interestingly but, when we got to let’s say 50% of it, the chapters that followed were, of what I felt, not directly linked to the main character’s main goal. Sometimes, he was just wondering around or going to classes all the time or speaking with some characters when not necessary and so it dragged. That’s why I cannot give this a five star rating. Because it could have been shortened or, hell not shortened, but included maybe some extra other parallel story, like for Alys’ marriage.

The romance…aww so cute. Gray and Brute made the most perfect of couples! (Except for, you know, Alec & Magnus.) And I adored the fact that neither Gray nor Brute was flawless. They weren’t. And that shook me. No, what shook me – in a good way – was how wonderfully they came to know one another, imperfections – plenty of them – aside. That’s what love is fundamentally supposed to be about, and this story explored it with talent and emotions. One complaint though: the sex scenes could have been more explicit…just a little more. There was such a young adult vibe to the story.