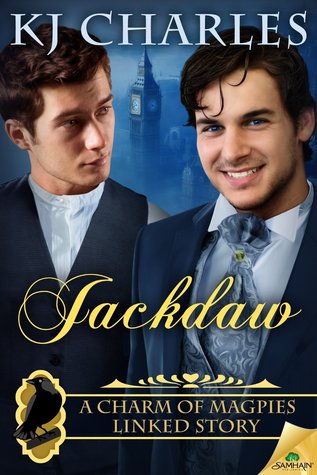 If you stop running, you fall.

Jonah Pastern is a magician, a liar, a windwalker, a professional thief…and for six months, he was the love of police constable Ben Spenser’s life. Until his betrayal left Ben jailed, ruined, alone, and looking for revenge.

Ben is determined to make Jonah pay. But he can’t seem to forget what they once shared, and Jonah refuses to let him. Soon Ben is entangled in Jonah’s chaotic existence all over again, and they’re running together—from the police, the justiciary, and some dangerous people with a lethal grudge against them.

Threatened on all sides by betrayals, secrets, and the laws of the land, can they find a way to live and love before the past catches up with them?

This story is set in the world of the Charm of Magpies series.

Warning: Contains a policeman who should know better, a thief who may never learn, Victorian morals, heated encounters, and a very annoyed Stephen Day.

I really didn’t want to DNF this one. Having loved The Magpie Lord by the same author, I was eager to start this read, when I received a copy of it via NetGalley. However, even though it started out relatively well and interestingly, it did not continue on that track.

The beginning was enjoyable but a little confusing. I mean, we were introduced to Ben, our hero, with good context but also to some secondary ones that weren’t that greatly described, which made them feel quite one-dimensional to me, for a good while. Then, not long after, we got some back story on Jonah and Ben’s relationship. I thought they were cute. And believed in their chemistry very much. But, sincerely, why did they have to meet in such an expected place? Why couldn’t it have been a more exciting and surprising meeting? Things were lovely for them, for the most part, after they met, and I did enjoy the flashbacks even if some were unnecessary. I guess they added some endearment to our main characters though, so they weren’t actually useless.

And so the story went. Ben was searching for Jonah, the thief and, when he got him, they flew together. And I was like ”Well, okay, why not, right? They’re somewhat lovers after all, even though in a quarrel.” But then I realized that the plot didn’t seem to go anywhere. I was at 40% and they were still on the road. Sure, things happened and they briefly met some new people, but they weren’t important! And one-dimentional as well! And so common that I didn’t bother paying attention to them. But what REALLY made me DNF this book – well, the straw that broke that camel’s back – was when they got a room together and Ben was thinking:

They should split up, it was obvious. It would have been obvious days ago, if Ben had been able to think properly. His mind was clear now, and he could see it all. Jonah would never change, would never be responsible, quite blatantly intended to steal again should it become necessary. Ben couldn’t live like that, waiting for the next disaster, not after Jonah’s love had already plunged him into hell. He’d say goodbye tomorrow and go, before they hurt each other more. It was the only sane thing to do, for both their sakes.

But if this was to be the last night…

No. No no no no no. You already did that once, remember??? Quite fiercely…In that room…before they tried to arrest you both…And what happened? Well, he saved you and oh! you flew together! And things started to get better. Well, not quite, since what Jonah did to Ben, this latter could never forget, but…it was just so frustrating because it was obvious that Ben was lying to himself about not wanting to hear more of Jonah and yet still sticked around with him. I hate it when, us readers, are simultaneously confused as well. But that’s personal.

It wasn’t all bad though. For instance, the writing was good and felt natural. The author did a great job portraying the main characters’ personality (hum, must be why I hated Jonah’s behaviour so much) and the world she created is special. I did have the occasion to discover it with The Magpie Lord, but this latter did not contain windwalkers or many different mages at all.

It can be read as a standalone, as the author said, but I would recommend reading it after Flight of Magpies nonetheless, because I feel like there were parts that unintentionally(?) spoiled me regarding Lord Crane and Day’s ‘adventures.’

I didn’t like this one. STILL, it doesn’t mean that I won’t try anything else by this author in the future. In fact, I bought her Think of England and A Case of Possession books, so I strongly hope that they will work better for me.

View all my reviews