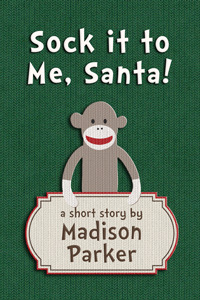 Sock it to Me, Santa! by Madison Parker

Ryan is assigned to Jamie Peterson for his class’s secret gift exchange. If word gets out that he has to make a handcrafted gift for flamboyant and openly gay Jamie, Ryan will be the laughing stock of the school. It’s a good thing no self-respecting boy would be caught dead in a craft store, because otherwise he’d be at risk of being spotted when his mom drags him to her weekly craft workshops. He hopes Jamie will appreciate all the trouble he’s going to for this assignment. Finding the perfect gift is gonna be tricky. Jamie deserves something good, though, after all the crap he has to put up with at school. At least, Ryan tells himself that’s the reason he’s putting so much thought into the gift. It couldn’t be that he has feelings for Jamie, could it?

❄☃ One month till Christmas! I think it’s time for some cute holiday reads until the 25th of December! And the first being an M/M romance one makes it all more exciting and heart-warming! ☃❄

Ryan surely didn’t expect to pick Jamie – quiet, knit lover and soft Jamie. He doesn’t know what to get him! He did try to knit some socks for him…but it ended up being a catastrophe. What is he going to do? He doesn’t want to disappoint him! Not again…

I had so much fun and pleasure reading this short story. Everything about it is enjoyable and entertaining – and sometimes, yes, sad. It was realistic and exactly what I was hoping for, before picking this perfect read for the holidays up!

Seeing Ryan and Jamie together made me sigh oh so many times. There was more than a moderated young adult sexual tension between them: friendship, affection and harmony – even though Ryan does screw up some little times – were present as well. When I think about them, there’s one word though that comes to my mind: innocence. They were both so innocent and trying to find themselves or doing everything possible for their passions to not falter. And, of course, the – could have been more present – romance was candy sweet.

It was adorable seeing how Ryan’s perspective on Jamie changed and how he found himself actually enjoying being around him.

Ryan’s sister, Dakota, is such a sweetheart! She made a very lovely secondary character and brought up a quality in Ryan that was good to see being there. He’s a great brother.

Dakota asked a hundred questions on the way. “Why did someone steal Jamie’s shoes?”

“Because they’re mean,” I said.

“I hope no one steals my shoes. Will you get my shoes for me if someone steals them?”

“No one’s gonna steal your shoes.”

“So? Boys can be cute. There’s a boy, Alex, in my class, and my friend Sarah thinks he’s cute. But don’t tell him. It’s a secret.”

“I won’t tell Jamie if you think he’s cute. I’m good at secrets.”

The writing was pleasant and the story noticeably dramatic focusing also on prejudices and judgments people make on gay kids and how it affects them, but I know high school isn’t easy and that some are blunter, more careless or having different beliefs than others and people will always judge, whatever you do, wear, however you react, act and that is why Jamie’s indifference – or so he shows – was admirable. He is one strong kid.

Aw, don’t think this is a short story you’ll have to skip on! On the contrary, whenever you have a bit of time, remember this, is what I suggest, and let it fill your heart with love, Christmas thoughts and the meaning of truly caring about someone. Enjoy!

11 thoughts on “Review: Sock it to Me, Santa! by Madison Parker”