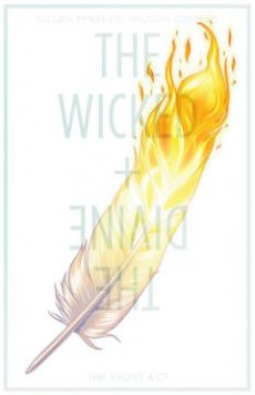 The Wicked + The Divine #1 by Kieron Gillen

BLURB: Every 90 years or so, twelve gods incarnate in the bodies of the young. They are charismatic and brilliant. They stand before crowds, speak in tongues, and send them into rapture. They’re rumored to perform secretive miracles. They save people’s lives, either metaphorically or literally. They are loved. They are hated. They are brilliant. Within two years, they’re dead. REVIEW: Oh my sweet goodness, this is one comic I feel I will get addicted to. I usually relatively like those, but this is incredibly beautiful and so well thought of. How can one resist the beauty that is uncovered in this first issue?

I never read something quite like this. The plot is extremely powerfully emotion-filled and contains a wonderful main character that has qualities and weaknesses, but I just couldn’t help but connect with her, since she is so human and absolutely relatable. If there’s one thing I look forward to seeing inside a comic or graphic novel is definitely art that will be pleasurable to watch. And this has every ounce of it. A very talented artist drew this comic.

Surprisingly, I would have still given a good rating, even if the illustrations would have turned out to be so-so. It has that kind of plot that just hooks you. To be honest, it is pretty confusing at first and it took me 3 chapters to really get into the story and begin to understand the meaning of who the gods (presented) were and why they were there and what was their role. I’m still not sure what powers and who every god really is, but I nonetheless feel like everything will be more clear when I’ll read the sequel, since, at the end of the story, I felt like it all started to slowly unravel itself. I just wish we would see more of the different gods. The only one that is very present is Luci. At least, her, I had no problem understanding.

At first, the pacing is slow. Very normal, since the author does need to introduce us to his story and world, of which to begin with we do not know everything about. He did this in a great way but, like I said, there are so many gods that it can get confusing. However, things pick up and, when the action starts, it is really good. Even before that, there is a mystery case going on and when Laura, the main character, was trying to get the bottom of it, I was hooked. She deeply wanted to uncover the truth, and I wanted the same thing – craved for it.

The world-building, except for the characters, is pretty typical, since it takes place in our world and century. The settings though are interesting and well drawn.

Of what I have deciphered of the romance in this book, for it isn’t quite clear and there isn’t much of it, there is an F/F couple and an M/F one for that matter. It is a little weird to tell you the truth, the F/F one, since they obviously have a great difference of age, but perhaps that is only in appearance? I would like more romance in the sequel, of preference between Laura and Baal, since they seem to be fitting well and they could have a good chemistry I believe, if only they would naturally spend more time together.

Overall, a wonderful read that is almost impossible to not enjoy for there is everything you may like: fantasy, mythology, sci-fi, mystery, intensity and a little ounce of romance. Highly recommended!