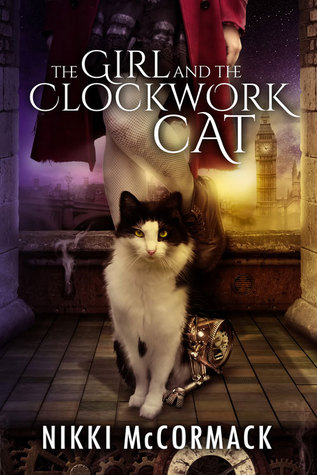 The Girl and the Clockwork Cat by Nikki McCormack

Feisty teenage thief Maeko and her maybe-more-than-friend Chaff have scraped out an existence in Victorian London’s gritty streets, but after a near-disastrous heist leads her to a mysterious clockwork cat and two dead bodies, she’s thrust into a murder mystery that may cost her everything she holds dear.

Her only allies are Chaff, the cat, and Ash, the son of the only murder suspect, who offers her enough money to finally get off the streets if she’ll help him find the real killer.

What starts as a simple search ultimately reveals a conspiracy stretching across the entire city. And as Maeko and Chaff discover feelings for each other neither was prepared to admit, she’s forced to choose whether she’ll stay with him or finally escape the life of a street rat. But with danger closing in around them, the only way any of them will get out of this alive is if all of them work together.

This can’t be a standalone.

That’s not how you write an ending for a standalone. There MUSTN’T be any sort of cliffhanger, if the author doesn’t want annoyed readers, that goes without saying.

First of all, I didn’t believe there really was a romance in this story. Sure, Ash seemed to have a more than friendship related opinion on the female lead (Maeko) but that unfortunately was one-sided, so how could I possibly call that to be romance? I called it angst and that’s it.

The angst was torturing. Maeko really made me want to give her a slap from time to time. Needless to say, her character didn’t mean anything to me. I did though have a bit of a heartbreaking feeling when seeing how alone she truly was, even though she always concealed it.

Back to the romance—AKA called angst—could you believe that, about ten pages before the ending, there is a character that from acquaintance, can-be-called-friend passed from that to love interest? I felt so so so bad for Ash and Maeko as a character went downhill in my esteem (even though she wasn’t high at all in the first place.)

But, you know, that’s not actually what I despised the most in this story. What I didn’t like as in oh please make it stop loathed was sadly the entire plot. Little question here: would you call looking for people over and over again being some sort of mystery? Because I don’t. I call it plot who lacks of imagination and that is mostly repetitive and especially boring.

Oh, it was awful! She kept looking and wondering for people over and over again. She went round and round and, even though this story has 224 pages, (according to Goodreads) it felt like it contained something like 400. You have no idea how happy I am to have finished it…but at the same time what was the point since the ending was sucky?

The writing was good in general but it’s the kind of writing that didn’t grip my attention. It sometimes happen and it’s a weird feeling since I’m never sure if it’s actually the writing, the atmosphere or simply the story. Basically, I wasn’t interested or even a bit invested in it. I tried to, of course, but it felt too forced and reading must feel natural for me to enjoy it.

World-building? None. As in at all. Good characterization for some specific characters but very very poor world-building.

This is the kind of story that I wouldn’t recommend even to someone that loves reading to a point that he/she never DNFs books or gives 1 stars. It’s just not worth it and retentiveness is one of my pet peeves—along with unclear endings—so I won’t recommend you go near it if they’re some of yours as well.

Would you consider voting for this review on Goodreads, if it was helpful? 🙂

50 thoughts on “Review: The Girl and the Clockwork Cat by Nikki McCormack”