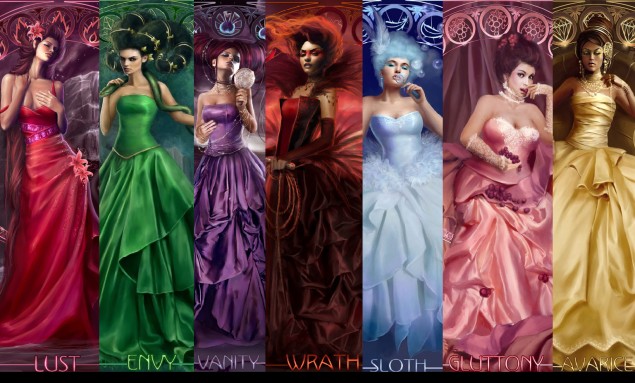 I’ve been tagged by Marianne at Boricuan Bookworms to do this tag so here I am! It won’t be as spectacular as hers but what counts in the end is the answers, right? …Right? LOL

Greed:
1. What is your most unexpensive book?

Well I did get Hopeless by Colleen Hoover on Amazon.ca as a freebie and I’m very proud of it, hehe. ^_^ But, actually, I don’t often pay my books. I usually get those for free for review or get them as presents for Christmas, my birthday or just because I’ve been a good daughter. (That was totally a lie. I have to beg my mother when there are no special occasions.)

Wrath
2. What author do you have a love/hate relationship with?

Like Marianne, that would be Rick Riordan. See, I loved the Percy Jackson series but the Heroes of Olympus one? Not so much (DNFed book 3.) I was just bored…so many characters, so many POVs, never-ending plotline. Blah, not my cup of tea I guess. BUT, I will still try his MG series to see if that works out better for me.

Gluttony
3. What book have you devoured over and over again with no shame?

Sloth
4. Which book have you neglected reading due to laziness?

I’m a very lazy person at picking the sequels of a series. But the one series I’ve been the laziest with would be The Vampire Diaries. I keep buying the books but read like 1 per 2 years. It’s kind of pathetic. xd In my defence, there are so many books in that series and they’re not even written by L.J. Smith now!

Pride
5. What book do you most talk about in order to sound like an intellectual reader?

Well, I’ve read many classics in my life (The Outsiders, Pride & Prejudice, Little Women, etc.) but I guess, again like Marianne, I will have to say Pride & Prejudice. I am so in love with Mr. Darcy (my second husband, hahaha.) Although, a classic I would love to read to discuss with people is A Little Princess. Have seen the movie but have yet to read the book, unfortunately.

Lust
6. What attributes do you find attractive in a male or female character?

I never know how to answer these kinds of questions because I find myself very contradictory from time to time. Like, I would say he has to be a good person and a bit indifferent in his attitude but still listening to you but then it doesn’t apply to everyone and it really depends. I have no idea but he (or she) has to be like Magnus Bane. HA.

Envy
7. What book would you most like to receive as a gift?

Right now? Give me Trial by Fire!! Give it to me now!! …Or not? But I will love you forever and ever! Don’t you want that? *puppy eyes* Give and receive haha
Since it hasn’t been released yet, the other alternative would be the manga of Pride & Prejudice in the Manga Classics collection. I actually read it but it was such a great manga with an extremely beautiful art so I would love to own it in hardcopy.

Thanks for tagging me, Marianne! xx

I Tag (sorry if you already did it):
Cristina at Cristina’s Book Reviews
Zoe at The Infinite To-Read Shelf
Tanja at Ja čitam, a ti?
and
Ima Vee at The Blah Blah Notebook

I hope to get the chance to read YOUR answers. ^_^ Have fun and thank you for reading!

By the way, I’m open to do other tags/posts like this so bring them on! There is something fun about answering those kinds of questions, in my opinion.