Unrequited
by Emma Grey
Release Date: 05/26/14
Summary from Goodreads:
Seventeen-year-old Kat Hartland loathes Unrequited, the world’s biggest boy band. Is she the only girl in Sydney who can’t be bothered with perfect-looking Angus Marsden?
Give her 5 Seconds of Summer. Now. Or maybe the seriously-hot med student who rescued her on a train—and who could be Douglas Booth’s twin! Perfect formal partner, much? But when Kat comes face to face with Angus Marsden himself, things start to get complicated. Very. Throw in a deranged female popstar, final exams, a part in the musical and a mum who just doesn’t get it—and where is her best friend? When did life get so crazy? Kat’s just an ordinary schoolgirl. Isn’t she?

Her attention drifts to the boy sitting opposite her on the train. In her anti-band flap, she hadn’t noticed him board. What an oversight! He’s on his phone and she shamelessly eavesdrops. He’s talking about his uni project while she takes mental note of his cheekbones and jawline—the type usually reserved for people like superman and Douglas Booth. On-trend reading glasses. Dark, floppy hair. A satchel full of textbooks gaping open on the seat beside him.

Hmm. At some point during his highly-technical phone conversation, which he is conducting in an incredibly warm, deep voice that Kat could listen to all day, she rouses the courage to smile at him. But he looks at her like she’s a thirteen-year-old Unrequited fan and glazes right over.

She wants to say ‘Hey, I’m seventeen and I hate them! This is absolutely a case of mistaken identity, trust me …’ But saying that might not come across as charmingly as it does in her imagination and he might end up thinking she’s more of a lunatic than he likely already does.

It’s a bad day when Angus Marsden and the boys, of all people, come between Kat and a potential date with a med student. (She’s decided that’s what he is, having stalkerishly scanned the titles on the textbooks spilling out of his bag and having seen enough of Grey’s Anatomy to put two and two together. And yes, ‘date’ may be getting ahead of herself a tad, but she’s particularly good at getting ahead of herself.)

WHY didn’t she do her hair?
Oh, hang on! He’s off the phone! Try to look casual. Look out the window. DO NOT MAKE EYE CONT— GAH! Too late!
Future Dr McDreamy fleetingly locks his dark brown eyes with hers. Her heart-rate explodes. Her entire life passes before her eyes …
Oh, wait! That’s what happens when you’re about to die, not when you’re falling in love. Get your emergencies right, Kat! 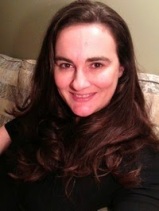 About the Author
Emma Grey has two teenage girls, a three-year-old boy, a couple of
businesses and another teen novel in the pipeline. Her first book, ‘Wits’ End
Before Breakfast! Confessions of a Working Mum’ was published in 2005.
Author Links: