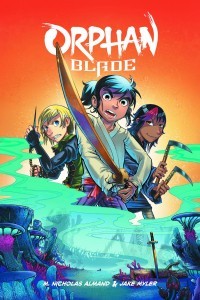 Hadashi is a boy with simple dreams… but his life changes when a horrific accident maims his hand! Unable to hold a sword, he’s kicked out of his dojo home. But the Orphan Blade is no ordinary sword. When Hadashi comes across the abandoned blade, he finds that not only is he able to wield it – the sword seems to be wielding him! He’s not the only one interested in the Orphan Blade, though, and his ownership draws the attention of the Five Fingers of Death – a deadly group of mercenaries who have their own magical and deadly weapons.

Well…this is not the kind of graphic novel I thought it was going to be. I expected adventure filled with a beautiful friendship shared. I did get the friendship part but I certainly couldn’t call this story an adventurous one.

I mean, there are some events, people searching for some artefacts and new discoveries but it mostly was a sequential art themed graphic novel. That’s not what I wanted, so I really can’t give this work a higher rating, despite the cool graphics.

Truth is there is 50% of battle in it, 30% info dumping or very confusing parts and a 20% of interesting scenes in which we meet new characters mostly and those are actually my favourite moments of the story.

Another problem I had is the main character being so young. HE IS 14 YEARS OLD. And kills monsters. It was actually quite bloody and I’m just happy I wasn’t eating while reading this.

Also, there are some characters that had REALLY random names. For example, a badass woman ‘warrior’ is named Lola. LOLA. I really stopped my reading for a second when I discovered that to analyze the character. Let me just tell you that there is nothing ‘Lola’ about that character.

Another example: there is a guy in this story named Megan. MEGAN. I really thought about it and came to the conclusion that I don’t know any guy named Megan in my life or even heard, read or imagined a guy being called Megan.

While the story and graphics gave me the indication that the story was set in the past (but let’s not forget that there is magic implied), the dialogs told me otherwise. The characters really have a ‘contemporary’ manner of speaking saying things like ‘freaking’, ‘awesome’, ‘ohmygod’. I just thought their manner of speaking didn’t fit the story.

ANOTHER confusing element: I think this is a LGBT graphic novel. Why? Well *MILD SPOILERS*, at the end of the story, the main character and his new close friend join hands in a very intimate way. PLUS, there is this picture that makes us believe that they are kissing except that we see the main character’s teeth so I can’t say for sure if they are or not. *END OF MILD SPOILERS*

Also, there is this art:

Final verdict: I don’t highly recommend this graphic novel at all. I think the best element is the art so, if you’re interested in that, go ahead, read it. BUT, if what you want has nothing to do with our main characters killing monsters and enemies (we don’t even know who they REALLY are), then not recommended even a bit.

28 thoughts on “Review of Orphan Blade by M. Nicholas Almand and Jake Myler”