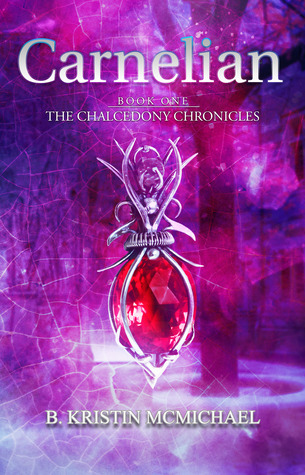 Carnelian by B. Kristin McMichael

My rating: 1 of 5 stars
I know some people have in mind to be more fond/easy on indie authors because of obvious reasons. Unfortunately, I am not one of those. For me, a book is a book and each one of them has to be treated equally. You can agree or you can not agree, but I’m staying with this rating anyway and with that thought as well. I believe full honesty from reviewers is the best way for them (authors in general) to overcome their weaknesses.

Carnelian has such a beautiful cover and a plot that seems promising.

I have been fooled once more needless to say.

The writing
: This author has an OK (AKA not bad) writing style and I liked the pacing since it was a fast one. What I am not a fan of is what she wrote about but this will come later. Her style succeeded to make me finish the reading of this book, especially because of the ambience which was not special but light. A HUGE problem I had with her writing was the fact that she kept repeating information as if maybe we didn’t understand the first time. Also she kept repeating words over and over again. It’s like she didn’t reread herself, didn’t care or didn’t realize it. For example:

Most probably arrived yesterday and were already making friends. I didn’t know a single person attending Morton as I was miles away from home and all my high school friends. It was a bit scary to start over, but it was for the best. I was really only going to miss a few of my friends, […]

”Chris?” I waved him over to the ground after we had our bandanas on. Sim grabbed a bandana and wadded it up in her hands to cover the bandana print in the middle of it.
”Do we have any more people showing up?” I asked, pointing to the left over bandanas.

As you have maybe guesses, repetition is one of my pet peeves in books. I think the author repeated the word ‘friend/friends’ like 50 times in the book. That is a lot because it contains only 200 pages. I have many other examples but will stop here.

The plot
: Marcelle is new at the Morton college. On her first day, a boy literally falls on her lap. Since that moment, she can’t stop thinking about him. Of course, she learns he is a player and doesn’t want to be another girl on his list. Apparently the guy, Seth, has two other brothers. Interested in knowing more about them, she reads their files and discovers that it is like their lives started three years ago because there is not data beyond that. Marcelle decides to learn who those guys really are and why does Seth keep insisting in going out with her.

Meh. A good thing is that the plot wasn’t predictable (except for the romance) but it was pretty simple. Also, between all of that, there is this competition called CRUSH which I have no idea why the author included it in her book. There is NO link with the time travel stuff. NO link. Carnelian felt absolutely like a contemporary until about 40-50% of it.

The ending, without telling any spoiler, was so ‘eye-rolling-worth.’ It’s as if what the main character did was useless because it only ‘proved’ something but without really having any positive consequence, just the obvious type.

So the author talks about a certain ‘war’ that is happening in the country and century from which the three boys are from. Technically, it is important, right? Really, huh? Well, tell that to Marcelle because she obviously doesn’t realize that. She is more than occupied spending time with her dear Seth:

I settled back into Seth’s arms and let the warmth keep me happy. I didn’t see too much of the movie as I laid there. I couldn’t put my finger on it, but it felt like time was pressing on us. Things were too quiet and peaceful. It couldn’t last, but I wanted it too.

Oh, so you don’t care about saving those people from a war. Selfish girl.

Marcelle is taking the fact that her parents aren’t actually her real parents too well. The fact that she is able to travel trough time feels normal for her. She simply reacts like this:

I was a child of time, whatever that really meant. No wonder my mother never mentioned who my father was. Maybe she didn’t know. Maybe she did know and know he would never be coming home. She always told me that he was gone and could never come back. I bet she knew. She had kept that from me all these years. I always thought something bad had gone down between my parents, and one day I would find something with his name on it. […]

That’s it? No suspicion? You truly believe that goddess without any proof that makes you a child of time? No ‘you’re all crazy’ scene? No running with tears falling from your eyes because your life has been a lie?

The characters
: they were very (main characters + secondary) stereotyped and felt so recycled. It’s like the author didn’t try to create them but more like she picked them. The only one I enjoyed reading about is Ty, and a bit of Seth.

Sim (Marcelle’s roommate): The only thing she cares about is boys. School? What the hell, she sleeps until the last minute before going to her classes. I mean, I understand about laying in bed in the weekends but not every day, girl. She’s not a bad person at least.

Ty (Sangre brother): Ty is so nice. He’s the perfect friend always there for you, in need of help. It’s a shame that there was no love interest for him. I’d perfectly see him with a friendly good girl. He didn’t have a big role as well as his other brother Dee.

Dee (Sangre brother): He doesn’t take much space. He’s quiet and we don’t ‘see’ much of him. His role is actually more important at the end of the book. Not special or different but the common type, except from the fact that he is from another century.

Seth (Sangre brother): AKA the love interest and soul mate of Marcelle. Oh Seth was charming (and persistent) I admit. I didn’t crave for him but, sure, I’ll go out with him anytime. He’s a great boyfriend. I wasn’t sure about his fidelity either before as Marcelle, but I guess I understand his motifs. Although, I used to not like him at the beginning of the story because he was really suspicious. Changed my mind on him, which doesn’t happen often, but I prefer liking characters from the beginning to the end of a book.

Marcelle (main character): AKA Mari, I didn’t connect with her at all. She is egoist, thinking only about her and Seth. She plays it cool saying things like ‘been there, done that’ and not wanting to be on Seth’s conquest list and pushing him away when she obviously wants him bad. Don’t get me wrong, I love angst, but this was just pathetic.

She sometimes said stuff that made just no sense at all. Like:

I hated that I liked him. He was just going to break my heart. Maybe he already had.

WHAT THE HELL? When someone breaks your heart, girl, you know it. You don’t think it.

Also, she and I don’t have the same understanding level because:

The goddess sensed my thoughts. ”You need the stone to be one of us,” the goddess replied. ”When time first began, my essence was placed in one hundred of those stones. I cannot send someone without a stone; it would be taxing on me on the point where I would fail at my role. With a stone in hand and part of my power, all I do is to give the person with the stone and push in the right direction. The stone is your connection to traveling. You needed the stone as much as the next person, but you didn’t need it to talk to me. […]

That was as confusing as it could get. I needed the stone, but I didn’t need the stone.

Could you be more stupid concentrated? She said you don’t need the stone to be able to talk to her but to travel yes. *rolls eyes*

Breanne, nice girl with blond curls introduced herself then…

”I’m Ty Sangre,” Ty stepped, in saving me from introducing myself. I really wasn’t as interesting as the Barbie doll in front of me.

About Melissa (interested in Seth but no one in particular):

We didn’t get to hear what she ranted on about. I was really curious what such a shallow girl could say in response.

It’s a pity that she acts like that, because I could really have liked the MC.

Or not since she’s so undecided and annoying:

(She kept saying how Seth is cute, cute, cute and cute.)

Darn boy he had to be cute, but I was not going to fall for him.

He had equal amount of traits I liked and disliked; I think my overall opinion was actually neutral on him. He was cute. Okay, not cute…gorgeous.

Urg, seriously? Is he cute or not? You misled me by saying he was cute when in fact he is gorgeous. No one likes to be misled, even for small things like that.

The romance
: Oh well, they’re soul mates, of course it is very cheesy, making me roll my eyes quite often, especially when Seth says things like:

”I didn’t kiss her,” Seth answered. ”She kissed me and I told her that nothing was between us, just like I told her tonight. You’re the only girl I see.”

Apparently, for Seth it was insta-love. Yeah, right, like I believe him.

There are plenty of other cheesy moments that you could discover while reading this book.

Overall, I think this could’ve been better as a contemporary and without that insta-love/ insta-hate element. The fact that the time travel theme was far in the book was a huge weakness in my opinion. The CRUSH competition was very interesting (due the contemporary suggestion) but totally unnecessary. I won’t read the sequel because I personally don’t care enough about the characters and story (which wasn’t as serious as it actually needed to be.)

4 thoughts on “Review of Carnelian by B. Kristin McMichael”